Autophagy and phagocytosis are two morphologically similar processes occurring inside the cell. Autophagy is called self-eating, clearing off the unwanted components of the cell. During autophagy, autophagosome is fused with lysosome by forming autolysososme. Phagocytosis is a mechanism of endocytosis which mainly occurs in phagocytes like macrophages and neutrophils. During phagocytosis, phagosome is formed surrounding the foreign substance. The main difference between autophagy and phagocytosis is that autophagy occurs when lysosomes are fused with autophagosomes in order to digest the dysfunctional structures of the cell taken into autophagosomes whereas phagocytosis occurs when a foreign substance is engulfed by the cell, forming a vacuole called phagosome, surrounding the foreign substance in order to separate it from the cytoplasm. 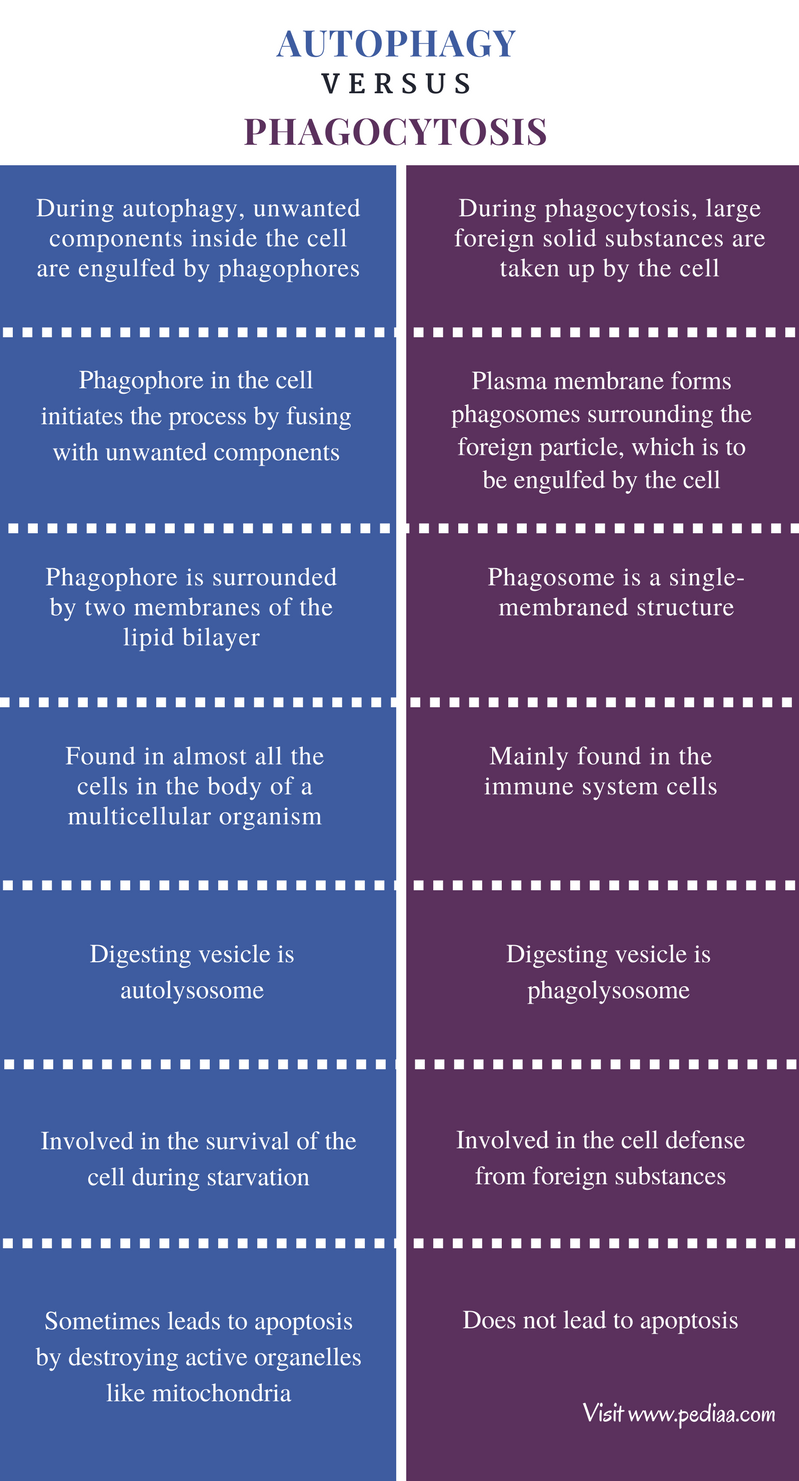 Autophagy is a fundamental catabolic mechanism, where the cell degrade dysfunctional or unnecessary cellular components. The degradation is occurred by the hydrolytic enzymes contained in the lysosomes. Autophagy maintains energy sources in the cell by recycling the damaged proteins, aggregates, and organelles in the cell. The end products of the degradation can be used as building blocks for the replacement of the depleted cellular components. Thereby, autophagy promotes the survival of the cell during stress by balancing the cellular energy levels. It allows the clearing of unwanted components from the cell as well. Hence, autophagy is pro-survival and capable of undergoing cellular stress like nutrient deprivation. But, autophagy lets the cell die by destroying active organelles in it like mitochondria.

Autophagy is initiated with the formation of phagophore surrounding the unwanted component in the cytoplasm. Phagophore is a double-membrane structure. Autophagosomes are formed by the fusion of phagophore with lysosome. The formation of autophagosome is induced by a class 3 phosphoinositide-3-kinase, Atg 6 and with the ubiquitin or ubiquitin-like proteins. Autophagosome is trafficked through the cytosol in order to fuse with lysosomes, forming autolysosome. An autolysosome is a double-membrane structure where the degradation of the unwanted components occurs. Autophagy and its regulation by an array of autophagy-related proteins (Atgs) is shown in figure 1.

Phagocytosis is one of the two mechanisms in endocytosis where the cell takes up foreign substances into the cell. Cells in the multicellular organisms ingest large solid particles like cell debris, aged cells, small mineral particles, dust, various colloids and bacteria. In the immune system cells, phagocytosis plays a vital role in the defense of the organism by destroying the invaded pathogens in the body. The immune system cells like tissue macrophages, neutrophils and monocytes are called professional phagocytes. Phagocytosis also occurs in Langerhans cells in the skin, Kupffer cells in the liver, the pigmented epithelium of the eye and the microglia in the brain. Amoeba like protists take nutrients into the cell by phagocytosis. Therefore, in single-cell organisms, phagocytosis is called as cell-eating.

Phagocytosis is a triggered process, which occurs through various receptors like immunoglobulin G, mannose (MR), β-glucan and complement (CR1, CR3). The particle that is to be uptaken is surrounded by pseudopodia and then pinched off into a vesicle called phagosome. Phagosome is fused with lysosome, forming the phagolysosome. The waste material formed by the digestion is expelled by exocytosis. In phagocytes, the phagocytized particle is sometimes large as the cell. In this situation, cells need to form a large vesicles. Phagocytosis of a bacterium is shown in figure 2. When an immune system cell is involved in the phagocytosis of bacteria, the bacteria are called antigens. 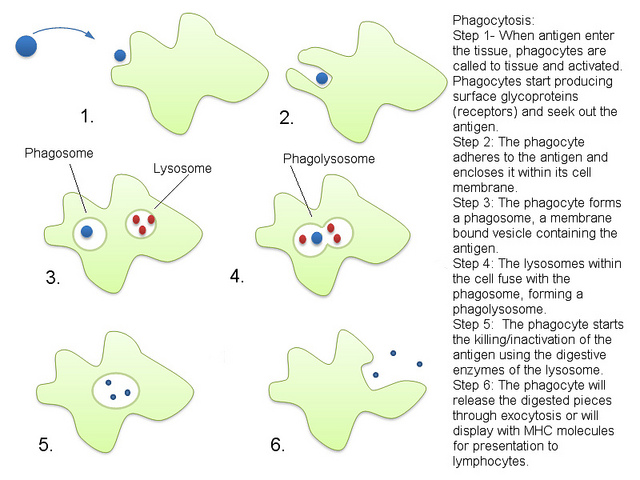 Difference Between Autophagy and Phagocytosis

Autophagy: During autophagy, unwanted components inside the cell are engulfed by phagophores.

Phagocytosis: During phagocytosis, large foreign solid substances are taken up by the cell.

Autophagy: Phagophore in the cell initiates the process by fusing with unwanted components.

Phagocytosis: Plasma membrane forms phagosomes surrounding the foreign particle, which is to be engulfed by the cell.

Membranes of the Initial Vesicle

Autophagy: Phagophore is surrounded by two membranes of the lipid bilayer.

Phagocytosis: Phagosome is a single-membraned structure.

Autophagy: Autophagy is found in almost all the cells in the body of a multicellular organism.

Phagocytosis: Phagocytosis is mainly found in the immune system cells.

Autophagy: The digesting vesicle of autophagy is autolysosome.

Phagocytosis: The digesting vesicle of phagocytosis is phagolysosome.

Autophagy: The end products of autophagy are used as building blocks during the formation of new organelles.

Phagocytosis: Digested products of food particles are absorbed and the waste is eliminated by exocytosis.

Autophagy: Autophagy is involved in the survival of the cell during starvation.

Phagocytosis: Phagocytosis is involved in the cell defense from foreign substances.

Autophagy: Autophagy is induced by a class 3 phosphoinositide-3-kinase, Atg 6 and with the ubiquitin or ubiquitin-like proteins.

Autophagy and phagocytosis are digestive processes occurring inside the cell by fusing with lysososmes. Autophagy is the self-eating process involved in the cell clearing by the degradation of unwanted components like organelles. Hence, autophagy allows the cell to survive during starvation by balancing the cellular sources of energy. Phagocytosis is involved in the degradation of foreign solid particles, which are engulfed by the cell. The engulfed particles can be either food particles or antigens like bacteria. Therefore, phagocytosis is involved in the cellular defense mechanisms by destroying the foreign substances like bacteria and cell debris. However, the main difference between autophagy and pahgocytosis is the substances which are engulfed by each of the two processes.