Chromatin and chromosome are two types of structures of the DNA double-helix appearing in different stages of the cell. The DNA double-strand which stores the cell’s genetic information should be packed into the eukaryotic nucleus for the existence. Chromatin is the usual form of the packaged DNA in the cell. Chromosome appears at the metaphase of the nuclear division. The main difference between chromatin and chromosome is that chromatin consists of the unravelled condensed structure of DNA for the purpose of packaging into the nucleus whereas chromosome consists of the highest condensed structure of the DNA double-helix for the proper separation of the genetic material between daughter cells.

Chromatin is a type of structure possessed by the DNA double-helix in eukaryotes. It consists of DNA, protein and RNA. The main purpose of chromatin is the easy package into the cell nucleus. In addition to packaging, chromatin regulates the gene expression and allows DNA replication. It also prevents DNA damage. The proteins bind with the DNA strand is histones.

Chromatin is composed of nucleosomes, which are the core particles interconnected by DNA stretches known as linker DNA. The nucleosome core particle is formed by wrapping 150-200 long DNA strands around a core of histones, consisting of eight histone proteins. Linker DNA is around 20 to 60 base pairs in size and also contains histones H1 which bind at the entry and exit of DNA in the nucleosome. Core particles together with H1 are known as chromatosome. The formation of chromatosome provides the structural integrity to the DNA molecule. The chromatin appears as beads-on-a-string structure by folding nucleosomes into 250 nm fibre. The structure of the nucleosome is shown in figure 1. 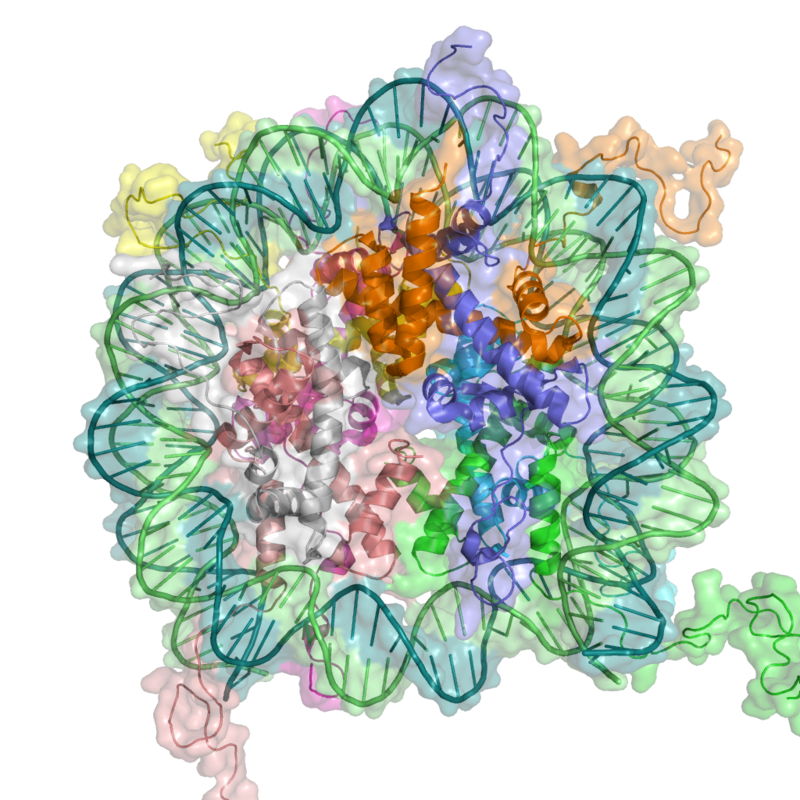 The highest condensed structure of the DNA double-helix with proteins is known as chromosomes. Some genomes contain more than one set of chromosomes. Several copies of the same chromosome are known as homologous chromosome pairs. The human body contains individual 46 chromosomes in the genome. Twenty two homologous pairs of autosomes and two sex chromosomes are included in this.

A chromosome contains thousands of genes packed into 10, 000 times than in the normal DNA double-strand. Prokaryotes contain a single, circular chromosome localized into nucleoid. Eukaryotes contain several large, linear chromosomes. A chromosome consists of origin of replication, centromeres and telomeres in addition to genes. Replication of the DNA is initiated with the origin of replication. It occurs in order to enter the cell division phase of the cell cycle. After the replication, a chromosome consists of two sister chromatids. They are held together by the centromere. Kinetochores are kind of proteins associated with the centromere to facilitate the separation of daughter chromosomes into two cells. Long arm of the chromosome is called q arm and the shorter arm of the chromosome is called the p arm in the four arm structure of the replicated chromosome. The ends of the chromosome do not replicate and stay as telomeres. Telomeres protect the genes at the end by preventing damage. The four arm structure of a replicated chromosome is shown in figure 2. 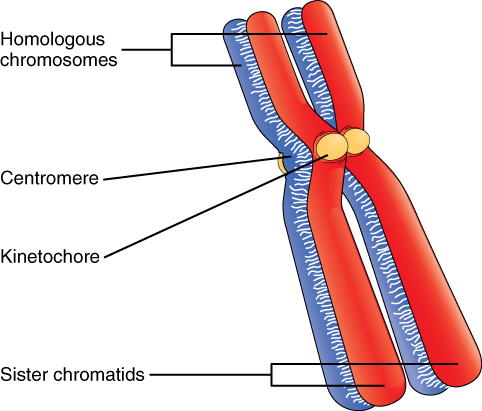 Four chromosome types can be identified depending on the centromere position. They are telocentric, acrocentric, sub metacentric and metacentric chromosomes. Nuclear division can be arrested at metaphase in order to study chromosomes. The process is called karyotyping where the abnormalities of the chromosomes are being identified.

Difference Between Chromatin and Chromosome

Chromatin: The DNA molecules in the genome are packaged with histones, forming chromatin.

Chromosome: The highest packaged structure of DNA appears in the metaphase of the cell division.

Chromatin: Chromatin appears in the interphase of the cell cycle.

Chromosome: Chromosomes appear during the metaphase and exist in the anaphase of the nuclear division.

Chromatin: Chromatin is composed of nucleosomes.

Chromatin: Chromatin is condensed 50 times than the normal DNA double-helix.

Chromosome: Chromosomes are condensed 10,000 times than the normal DNA double-helix.

Chromosome: Chromosome exists as a pair.

Chromatin: Chromatin allows the genetic material to be packed into the nucleus while regulating the gene expression.

Chromosome: Chromosomes do not show any metabolic activity.

Chromosome: Chromosome is usually heterochromatic. It consists of shapes like metacentric, submetacentric, acrocentric and telocentric.

Chromatin: Chromatin can be observed under the electron microscope as a bead and string structure.

Chromosome: Chromosome can be observed under the light microscope in its classic four arm structure.

Chromatin and chromosome are the two types of condensed structures of the DNA molecules. The interphase DNA exists as thread-like structure known as chromatin. The major purpose of chromatin is to pack the double-stranded DNA into the cell nucleus with the aid of histone proteins. The DNA molecules are condensed 50 times than its normal structure in the chromatin fibres. Chromosome appears only in the metaphase of the cell cycle, achieving its highest condensed structure. The main purpose of the chromosome is to ensure the separation of doubled genetic material between the two daughter cells. The main difference between chromatin and chromosome is in their condensity and function during the cell cycle.