Fascism and communism are two political philosophies which became prominent after the WW1 and WW2. Under the dictatorship rule of Adolf Hitler, fascism rose prominently in Germany and spread to several other parts of the world as well. Comparatively, communism was pioneered by Karl Marx and Fredrich Engels before the rise of Fascism. Therefore, these two are two diverging poles in the international politics. Apart from the given main difference, there is complete control of the economy by the government in communism while the businesses are nominally privately owned in fascism and the state dictates outputs and investments of the products. 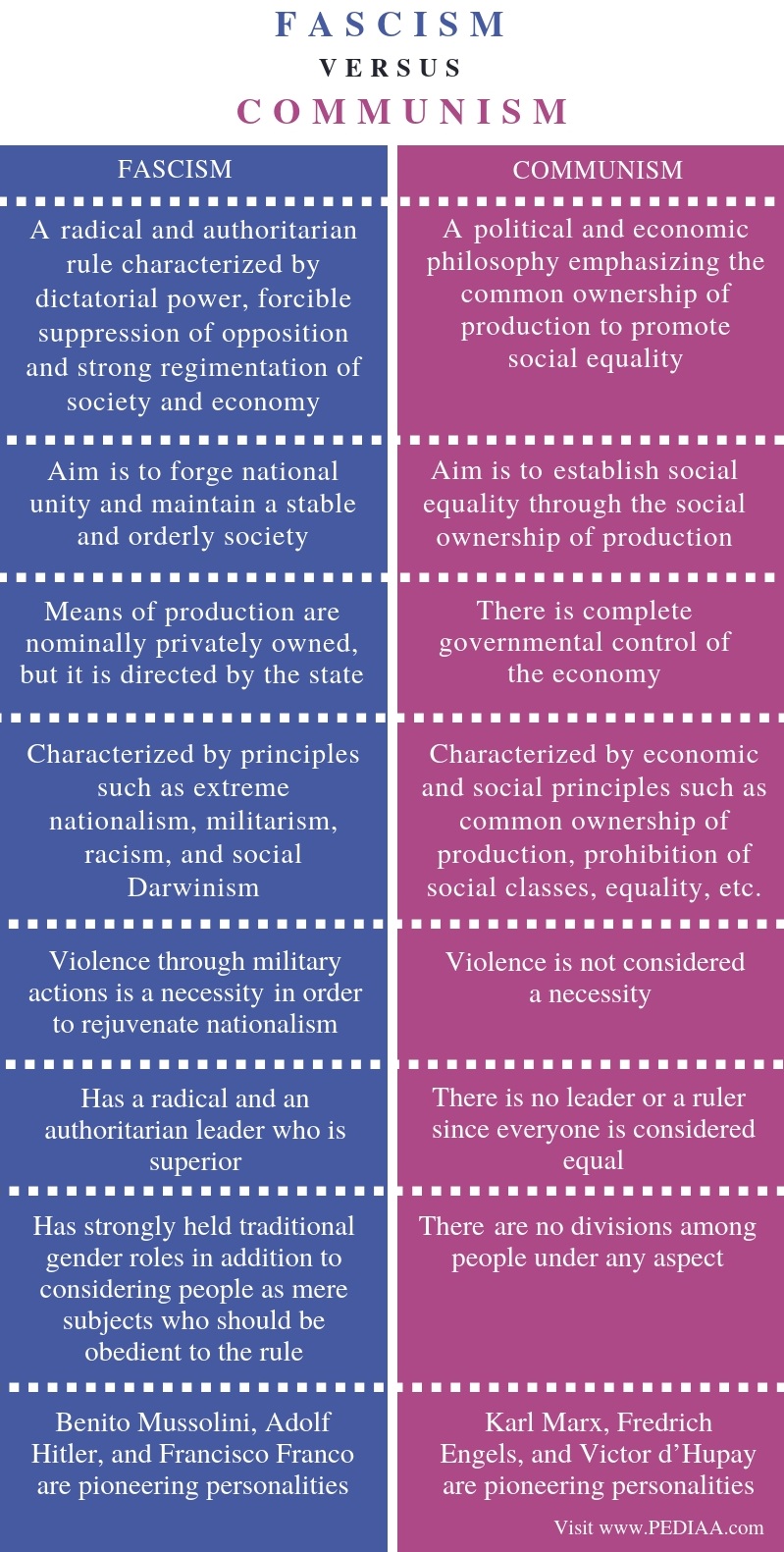 Fascism is a political philosophy or an ideology that advocates or is characterized by the authoritarian or dictatorial ruling. This ruling is often radical, and there is forcible suppression of opposition and strong regimentation of society and economy in order to evade internal social turmoils. This philosophy came into being after the WW1 (early 20th-century) as initiated by Benito Mussolini in Italy and other pioneering personalities such as Adolf Hitler. 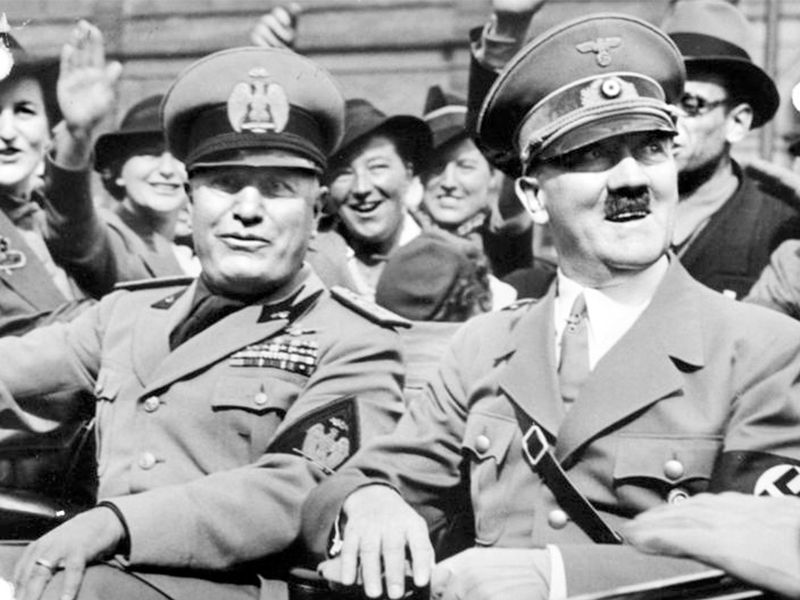 Thus, in fascism, one charismatic leader has absolute authority, and he is the symbol of the state. There is no election system, so the advisers and other government personnel are generally picked by merit rather than election.

Mussolini describes the philosophy of fascism under three main pillars as:

2.”Nothing outside the state” – This means the country must grow, and have every human submit to the government.

3.”Nothing against the state” – Any type of questioning the government is not to be tolerated. Therefore, if someone does not agree with the government, that person has to be killed, and the minds of the rest of the good citizens will not be tainted.

Thus, fascism promotes nationalism at all costs. The core principle in fascism is to make the nation stronger, powerful and successful. Therefore, fascist emphasizes national strength as the sole requirement for the good of a nation. Similarly, the use of military and violent scheme to promote this ideology and to achieve the goal is a primary principle in fascism or right-wing political views. Thus, the implied a goal of every fascist ruler is ultimate to rule the entire world. 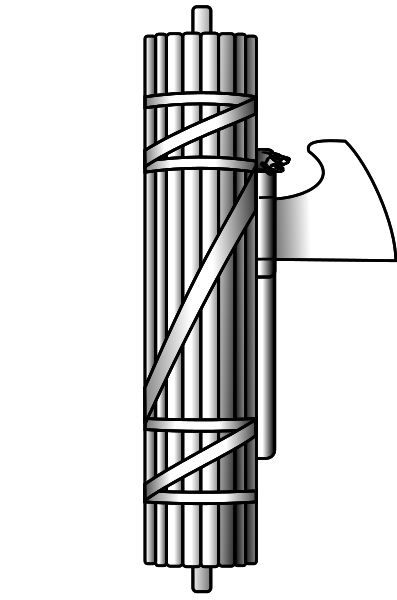 Figure 2: A Fascist Symbol – an axe bound in a bundle of wooden rods, a symbol of power over life or death through death penalty

Moreover, according to the fascist view, political violence, war, and imperialism are means to achieve national rejuvenation. Therefore, militarism or the use of military actions is regarded as the sole means to accomplish these fascist goals, especially to keep the subjects obedient and within the framework. As a result, there is lesser internal social revolts and revolutions. Similarly, since this is an authoritarian rule, there are no opposition political parties or elections.

Communism is a political philosophy or an ideology that advocates social equality through the equal distribution of production and profit among the community. This will eventually lead to equality in the society by diminishing social class divisions by empowering the working class. Hence, this theory is based on the principle “from each according to his ability, to each according to his needs” as stated by Karl Marx.

The word ‘communism’ was first coined by French philosopher Victor d’Hupay in his book ‘Projet de communauté philosophe’ in 1770. Communism can be therefore defined as a political as well as an economic philosophy, which came into being in the mid-19th century. This philosophy was initiated and developed notably by Karl Marx and Friedrich Engels. 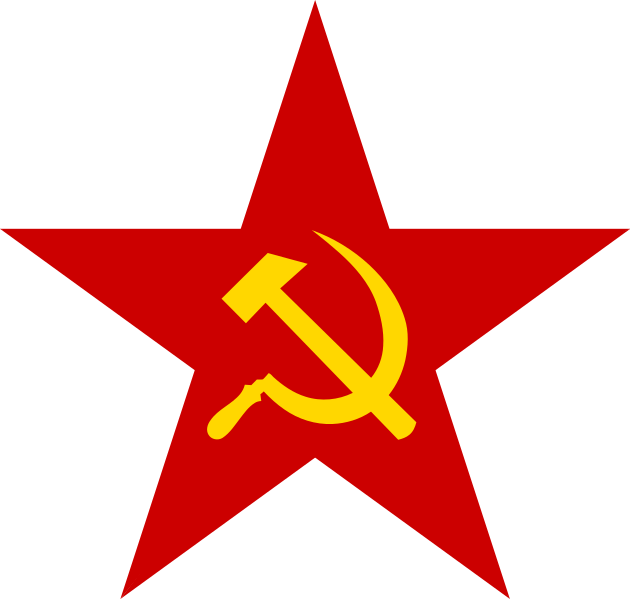 Therefore, communism is developed against capitalism whose main aim is to empower the suppressed working class by establishing social ownership of the means of production. Accordingly, there is a high interference of government in the market and trade.

Similarities Between Fascism and Communism

Difference Between Fascism and Communism

Fascism is a radical and authoritarian rule characterized by dictatorial power, forcible suppression of opposition and strong regimentation of society and economy. On the other hand, communism is a political and economic philosophy emphasizing the common ownership of production to promote social equality. This explains the basic difference between fascism and communism.

The aim of fascism is to forge national unity and maintain a stable and orderly society while the aim of communism is to establish social equality through the social ownership of production. This is a main difference between fascism and communism.

Government Control of the Economy

Another importantant difference between fascism and communism is the control of economy. The means of production are nominally privately owned, but it is directed by the state in fascism whereas there is complete governmental control of the economy in communism.

Use of Violence and Military Actions

Fascist has a radical and an authoritarian leader who is superior whereas in theory there is no leader or a ruler in communism since everyone is considered equal.

Moreover, fascism has strongly held traditional gender roles in addition to considering people as mere subjects who should be obedient to the ruler. Besides that, racism is the principle of discrimination in fascism whereas in communism there are no divisions among people under any aspect.