Interphase and prophase are two terms, which are used to describe different periods of the cell cycle. Interphase is considered as the growth phase of the cell, which occurs between two mitotic divisions. During the growth phase, the cell collects required nutrients for the protein synthesis and DNA replication. Prophase is the first phase of cell division. Chromosomes are connected to the spindle apparatus during prophase. The main difference between interphase and prophase is that during interphase, the cell grows by increasing the size and duplicating the genetic material whereas, during prophase, actual cell division starts by chromosome condensing. 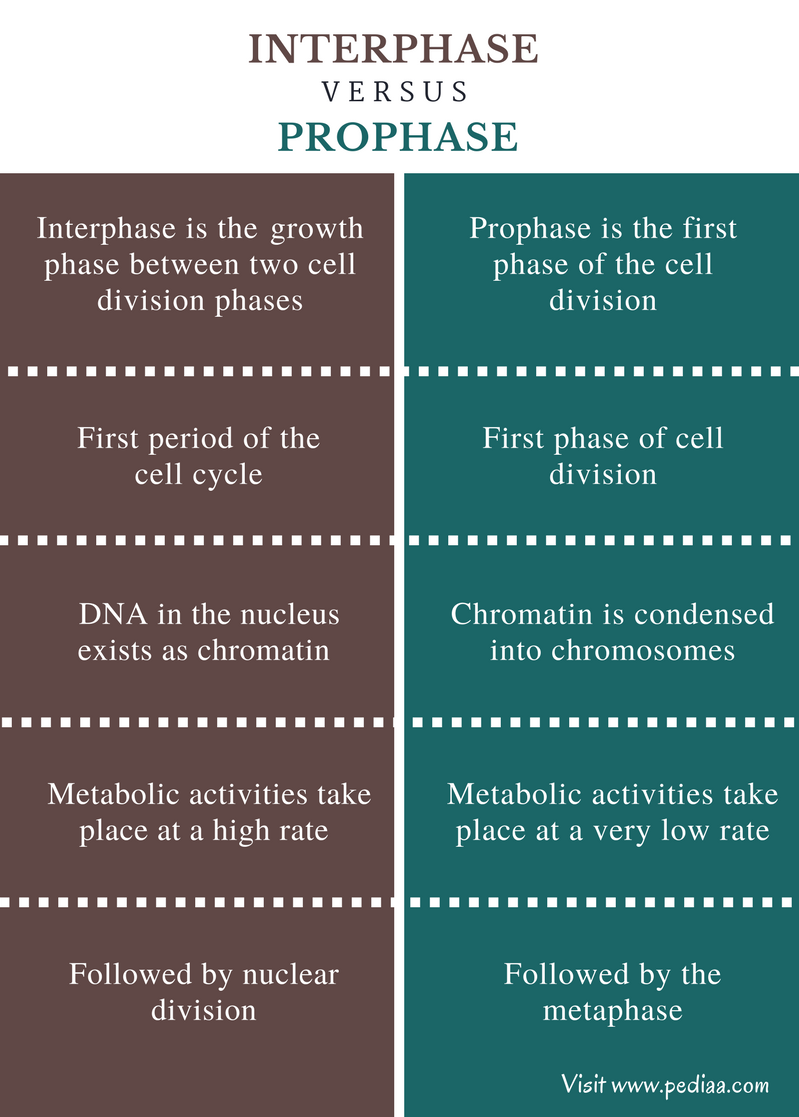 The interphase is the initial phase or the growth phase of the cell cycle in eukaryotes. Before entering the cell division, cell prepares for its division by processes such as up taking all requiring nutrients into the cell, protein synthesis and replication of DNA. Interphase accounts for about 90% of the total time of the cell cycle.

It is composed of three sequential phases: G1 phase, S phase, and G2 phase. Before entering into G1 phase, a cell normally exists at the G0 phase, which is the resting phase of cell cycle. The cell leaves the cell cycle and stops its division during G0 phase.

The G1 phase is the first growth phase of the interphase. The biosynthetic activities of the cell take place rapidly during the G1 phase. The synthesis of proteins, as well as the increasing the number of organelles like mitochondria and ribosomes, occur at G1 phase. G1 phase is followed by the S phase. Replication of DNA commences and completes during the S phase, forming two sister chromatids per single chromosome. The ploidy of the cell remains unchanged by the doubling of the amount of DNA during the replication. The S phase is completed within a short period of time in order to rescue DNA from external factors like mutagens. S phase is followed by the G2 phase. The G2 phase is the second growth phase of the interphase which allows the cell to complete its growth prior to its division. 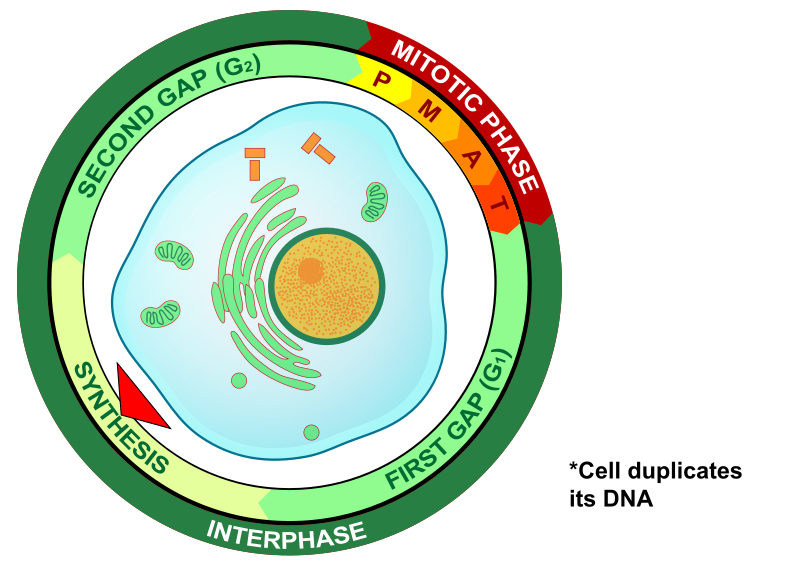 After the completion of interphase, the cell enters the nuclear division period. The nuclear division can be either mitosis or meiosis. The nuclear division is followed by cytokinesis, which is the cytoplasmic division, forming two daughter cells. These two daughter cells, which are resulted from the mitotic division again enter the G1 phase. The timing between each of the three phases is regulated by cyclin-CDKs. Two checkpoints can be identified during the interphase: G1/S checkpoint and G2/M checkpoint. The transition of G1/S is the rate-limiting step of the cell cycle which is known as the restriction point. By the G1/S checkpoint, the presence of sufficient raw materials for the DNA replication is checked.

Prophase is the first phase of the mitotic cell division. In meiosis, two prophase stages can be identified: prophase 1 and prophase 2. During the prophase of mitosis, chromatids are condensed into chromosomes, exhibiting short and thick, thread-like structures. Since DNA replication has occurred previously in the interphase, each chromosome contains two identical copies of DNA, which are called sister chromatids. The two sister chromatids of the chromosome are attached together via its centromere of the chromosome. These chromosomes are aligned in the equatorial plate of the cell with the aid of forming spindle apparatus. The kinetochore protein complexes are attached to the centromeres of the each chromosome.

Nucleolus of the nucleus is disappeared during the chromosome condensation. Contents of the nucleolus are dispersed as masses. Prophase is followed by prometaphase, which is a subphase of metaphase. During prometaphase, the nuclear membrane is broken down, allowing the spindle microtubules to invade the nucleus. Spindle microtubules are attached to the kinetochore protein complexes in the centromeres of the chromosomes.

During prophase 1 of meiosis 1, homologous chromosomes pair by synapsis, recombining non-sister chromatids at the points called chiasmata. Prophase 2 of meiosis 2 is quite similar to the prophase of mitosis.

Difference Between Interphase and Prophase

Interphase: The growth phase between two cell division phases is referred to as the interphase.

Prophase: The first phase of the cell division is referred to as prophase.

Interphase: Interphase is the first period of the cell cycle.

Prophase: Prophase is the first phase of cell division.

Interphase: DNA in the nucleus exists as chromatin, which is a long thread-like structure.

Prophase: Chromatin is condensed into chromosomes, which are short rod-like structures, clearly visible under the microscope.

Interphase: The cell grows by uptaking all requiring nutrients into the cell, undergoing protein synthesis and replication of DNA during the interphase.

Prophase: Chromosome condensation, disappearance of the nucleolus and formation of the spindle apparatus are the major events of the prophase.

Interphase: Interphase is followed by the nuclear division.

Prophase: Prophase is followed by the metaphase.

Interphase and prophase are two stages in the cell’s life cycle. Interphase is considered as the growth phase of the cell, where it obtains all necessary nutrients for the protein synthesis and DNA replication to get ready for the next cell division. Interphase consists of three phases known as G1, S and G2 phases. DNA replication occurs during the S phase. Generally, DNA in the nucleus exists as chromatin fibres during the interphase. When the cell enters its divisional stage, chromatin is condensed into chromosomes during the prophase. Prophase is the first phase of the mitotic cell division. During chromosome condensation, nucleolus disappears; nuclear envelope also disappears during late prophase. Thus, the main difference between interphase and prophase is the events that occur during each stage, especially the fate of the genetic material in the cell.