The main difference between Wifi and Lifi is, Wifi uses radio waves in order to transmit data at a slower data rate whereas Lifi uses visible light in order to transmit data at a much faster rate. Lifi is a groundbreaking technology which has been introduced recently in wireless communication. Through this technology, the bulbs at homes, offices and streets will not only be able to light and illuminate the environment but will also be able to transmit data wirelessly at high speed. Let us take a closer look at Wifi and Lifi and see what both of these technologies have to offer.

Wifi is one of the most preferred ways to access the internet in today’s world. It has become very much famous in the recent past and is available in most parts of the world. This connection type can be accessed with the use of a wireless adapter which is inside the computer. According to the amount of data on the network that is to be transferred, Wifi uses certain frequencies in between 2.4 GHz and 5GHz to create the connection. An area which is able to provide Wifi facilities is known as a Hot Spot. Users will have the opportunity to request connections to these wireless connections with the use of softwares. To gain access to Wifi, the wireless router should be properly configured and connected to the internet.

These days Wifi is available in many places like home, libraries, hotels, and airports. The job of the wireless adapter is to convert the data into a radio signal. In technical terms, Wi-Fi is known in a few ways like 802.11 networking and IEEE 802.11. In fact, Wi-Fi is short for wireless fidelity. One of the main advantages of Wi-Fi is its ability  to operate regardless of the operating system device; this is very useful in connectivity.

The frequency that the transmission takes place will vary according to the amount of data that is being transferred. But it lies within the frequencies of 2.4GHz and 5GHz.

Hotspot is known as the area where wi-fi is available. This hotspot can be at home, which is referred to as a closed wireless network, or in public places like airports. The key feature to access wifi is the wireless adapter as stated earlier. Today’s laptops come with this feature built-in which makes it easier to access such a feature. If it is not built-in, an external wireless adapter will have to be bought and plugged into a PCI slot or a USB port in order to gain wifi access. The device will be able to automatically detect a wifi hotspot and the user will be able to access this feature. 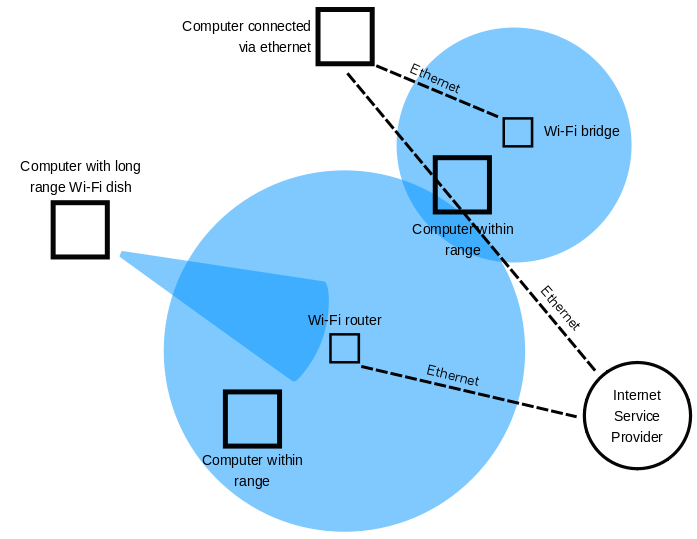 For many decades, light has been produced for a basic purpose of illumination of our homes, offices, etc., but now, LEDs are paving the way for a new use, not only providing us with light but also in the form of communication. Recently research has been able to reveal that LEDs can be used for wireless communication, which will be able to link a computer or a smart device to the World Wide Web and it is named Lifi that stands for light fidelity. The main difference between wifi and Lifi is that Lifi uses light in order to communicate data whereas wifi uses radio signals.

Another main advantage of Lifi is that it is ultra-fast compared with wifi. This can be considered the latest wireless technology to be developed to date. From a speed point of view, it will be the best alternative to wifi. Recent tests have shown that Lifi is capable of providing the speed of 1GB, which is incredible. This is almost hundred times faster when compared to Wifi.

The frequency used for the data transfer will be the frequency which comes with the visible light. The use of visible light is able to increase the bandwidth of lifi by hundred times. With just the addition of a small microchip, the LED will be able to work as an illuminating device as well as a wireless transmission device. 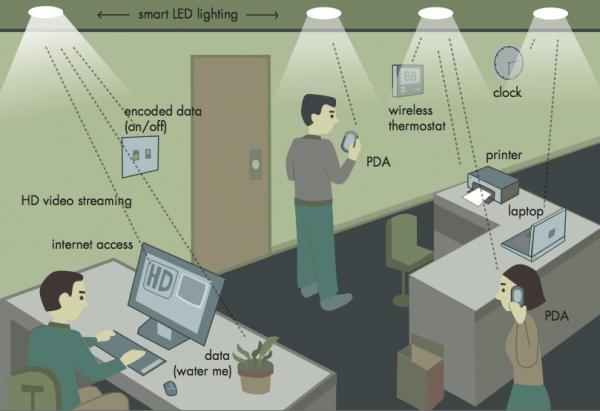 Difference Between Wifi and Lifi

Lifi is known as Light Fidelity.

Wifi is known as Wireless Fidelity.

In Lifi, data is transmitted with the use of light produced by LED bulbs.

In Wifi, data is transmitted with the use of radio waves and a wifi router.

Lifi does not have interference issues like with radio transmission.

Wifi is accompanied by interference issues near access points.

Lifi is compatible with IrDa devices.

Lifi can be used in a variety of environments such as airlines and sea exploration.

Wifi is mainly used for internet browsing and to create hotspots.

Lifi works well in dense regions and can transmit through salt water. It has less interference.

Wifi does not work well in dense regions; it cannot pass through water and inference is more.

Lifi cannot pass through walls, so data is protected and more secure.

Rate of Transfer of Data

In Lifi, data can be transferred at 1Gbps.

In Wifi, data can be transferred at 150Mbps with the use of WLAN -11n.

The frequency that could be used in Lifi is ten thousand times the frequency of the radio spectrum.  The frequency range used is between 400 and 800 terahertz on the visible light range.

In Lifi, the range that data could be transferred is 10 m.

In Wifi, the data transfer is about 32 meters, but this will vary according to the antenna and transmitter power.

Wifi uses a router and a subscriber device. 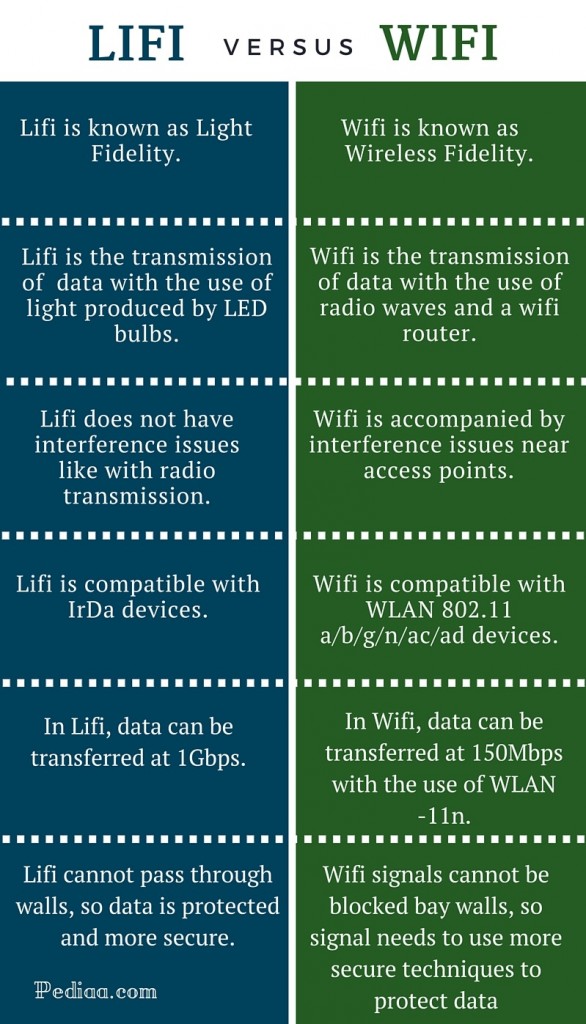 From the above comparison, it is evident that Lifi is a new technology which has the ability to surpass wifi easily due to its faster data rate and safety. Due to the above features and the simple hardware modification that needs to takes place, it will be an ideal alternative to wifi. It will also be able to provide a greater range when compared with wifi.