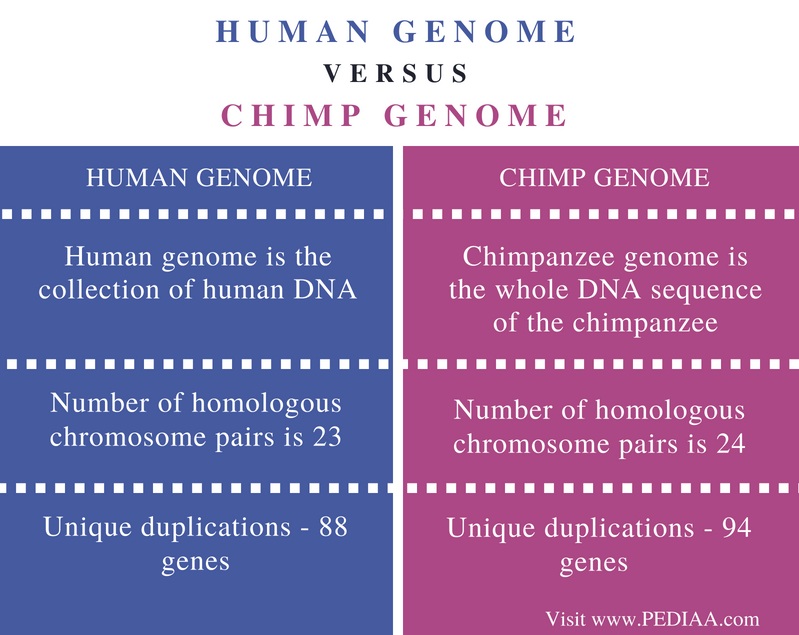 What is Human Genome

The human genome is the collection of human DNA. Human genetics focuses on the nucleotide sequence of the human DNA revealed by the Human Genome Project (HGP) completed on 14th April 2003. Humans are the most developed members of the mammal order primate. Humans, gorillas, chimpanzees, bonobos, and orangutans are close relatives collectively called the great apes. Homo sapiens is the scientific name of humans. The human genome contains over 3 billion base pairs organized into 46 chromosomes: 22 autosomal and two sex chromosomes. <2% of the human genome contains coding DNA transcribed into mRNA. About 20,000 protein-coding genes are present in the human genome. 98% of it is noncoding DNA, which includes genes coded for tRNA and rRNA, pseudogenes, introns, UTR (untranslated regions of mRNA), regulatory DNA, repetitive DNA, and mobile elements. Though chimpanzees are one of the closest relatives of humans, chimpanzee genome contains 24 paired chromosomes. The human chromosome 2 is the result of the fusion of the ends of ancestral chromosome 2A and 2B. Additional 150,000 bp sequence presents at the site of fusion. Shown in figure 1 is the human chromosome 2 and the additional sequence. The additionally linked genes may copy from the p end of the chromosome 9. 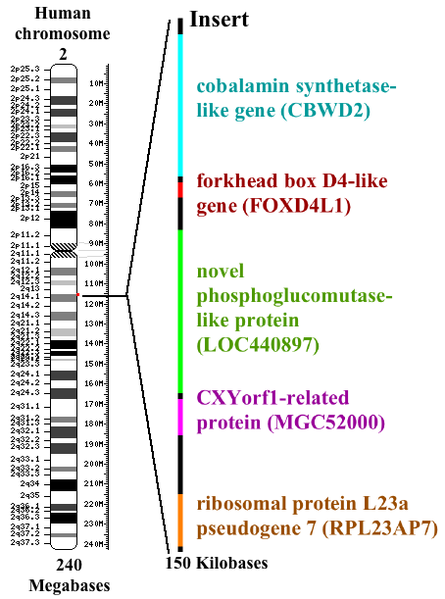 There are six chromosomal regions in the human genome that had undergone a strong and coordinated selection over the past 250,000 years. Interestingly, at least one allele maker unique to the human lineage is present in each of the above-mentioned regions. FOXP2 gene and CFTR gene are such markers.

What is Chimpanzee Genome

Apart from that, highlighted below are some other genetic differences between human and chimp genome.

Furthermore, the gaps of the genomes near the key genes differ from each other in human and chimp genomes. These gaps differentially alter the expression of nearby genes. The insertion or deletion of junk DNA sequences called the retrotransposons create these gaps.

Genetic Similarities Between Humans and Chimps

Genetic Difference Between Humans and Chimps

Human Genome: Human genome is the collection of human DNA

Chimp Genome: Chimpanzee genome is the whole DNA sequence of the chimpanzee