Algae are the plant-like organisms, which are classified under kingdom Protista. They are mostly unicellular and found in fresh, marine and wastewater habitats. Most of the algae are autotrophs, containing photosynthetic pigments in their cells. Heterotrophic and mixotrophic algae types are found as other nutrition modes. Mixotrophic algae use nutrition modes, autotrophy and heterotrophy. Autotrophic algae serve as the primary producers of aquatic food chains. Around 70% of breathing oxygen is produced by algae.

All cells in the plant body of algae are capable of growing and reproducing. The size of algal body is varied from microalgae to macroalgae. Cyanobacteria are prokaryotic microalgae. They are called blue-green algae as well. Sea-weeds are macroalgae. Algae produce motile spores during asexual reproduction. Sexual reproduction of eukaryotic algae occurs by the union of male and female gametes, which are produced in different individuals. Hence, eukaryotic algae are sexually dimorphic. Fresh water algae in a pond are shown in figure 1. 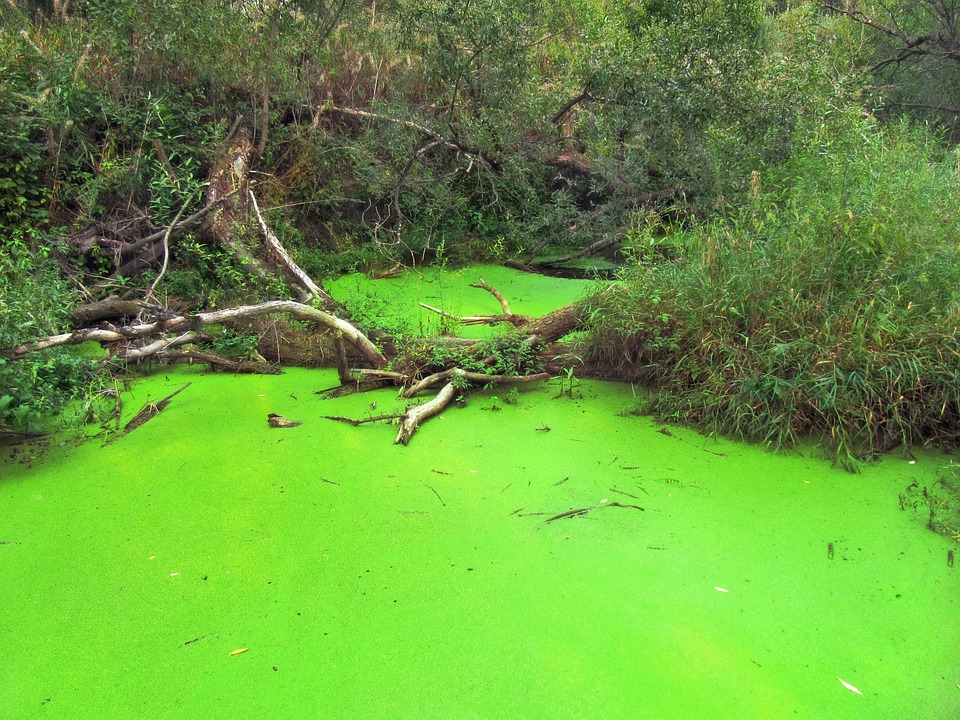 Chlorophyta, Rhodophyta and Phaeophyta are the three morphological types of algae. Chlorophyta is the most diverse group of algae. Chlorophyll, beta-carotene and xanthphylls are the pigments found in Chlorophyta. Hence, Chlorophyta is called green algae. Rodophyta are red algae, containing phycoerythrin as the main photosynthetic pigment. Phaeophyta are brown algae, containing chlorophyll c and fucoxanthin as the photosynthetic pigments. Laminaria saccharina, which is a brown sea-weed, is shown in figure 2. It is commonly called as kelp. 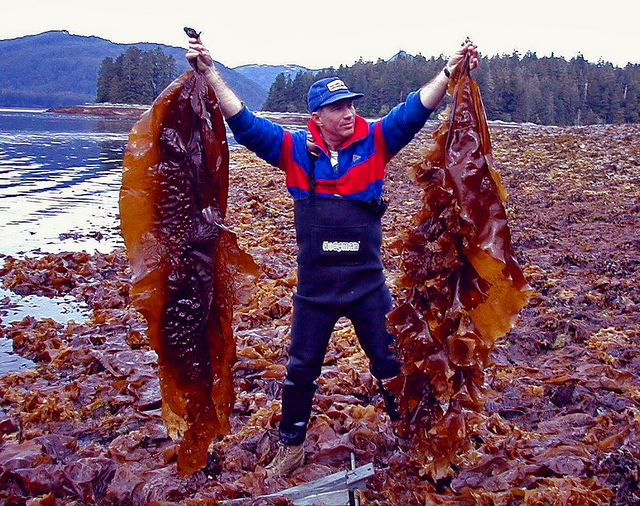 Bryohytes are a division of non-vascular land plants, which are classified under kingdom of Plantae. They are spore-producing plants in which the gametophyte stage is dominant in the life cycle. Bryophytes are not seed-producing or flowering plants. They are mostly autotrophs. Some bryophytes like liverworts do not contain chlorophyll; hence, they rely on a fungal partner for food. Bryophytes grow in moist shady places, producing phenolic compounds which deter herbivores. Other plants are also  benefited by the water collected by bryophytes.

Bryophytes are macroscopic plants and their size varies from a milimeter tall to long strands about one meter. Root-like structures called rhizoids allow the plant to anchor on a surface. Rhizoids are not water absorbing units. Water is conducted internally in the plant body which is absorbed by the plant body itself. Asexual reproduction of bryophytes occurs by fragmentation and small aggregations called gemmae. Water carries sperms to the eggs during sexual reproduction. Fertilization of gametes forms the gametophyte with the spore capsules called sporophyte. Sporophyte produces spores, which are dispersed through the wind. The gametophyte of Oedipodium griffithianum  with gammae is shown in figure 3. 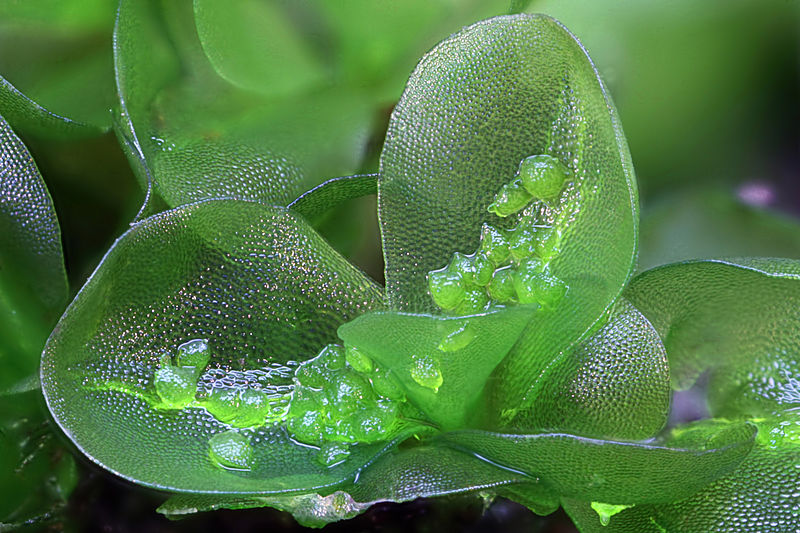 Marchantiophyta (liverworts), Bryophyta (mosses) and Anthocerotophyta (hornworts) are the three divisions of bryophytes. Liverworts are flattened moss-like leafy plants. The leaves of the liverworts do not contain costa. But marginal cilia are present in liverworts. Mosses consist of one cell thick, simple leaves, which are attached to a stem. They grow in dense green clumps. Mossses contain costa, which is a midrib, running lengthwise through the leaf. Hornworts consist of a horn-like, elongated sporophyte on the gametophyte. Jamesoniella undulifolia, which is a liverwort is shown in figure 4. 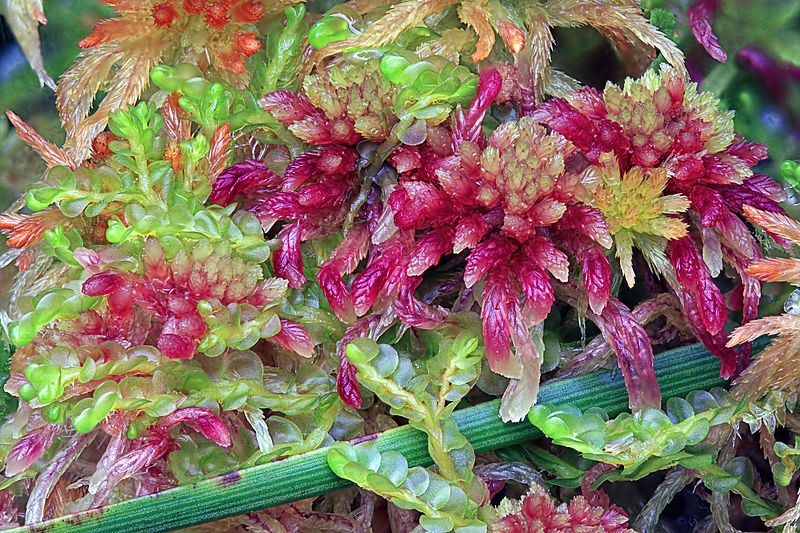 Difference Between Algae and Bryophytes

Bryophytes: Bryohytes are a division of non-vascular land plants classified under kingdom Plantae.

Algae: Algae serve as the primary producers in aquatic food chains while releasing high proportion of breathable oxygen in to the atmosphere.

Algae: Both unicellular and multicellualr algae are present.

Bryophytes: All bryophytes are multicellular.

Algae: Algae can be unicellular or multicellular and filamentous, thalloid or leafy.

Algae: Pores or stomata are absent in algae.

Bryophytes: Gas exchange occurs through pores or stomata in bryophytes.

Algae: Rhizods are absent in algae.

Bryophytes: Two types of rhizoids are found: smooth-walled and tuberculated.

Algae: Each and every cell in the body is capable of growth and reproduction.

Bryophytes: Only apical cells are capable of growth and reproduction.

Algae: Oogonium is the female sex organ in algae.

Bryophytes: Archaegonium is the female sex organ in bryophytes.

Algae: Algal zygote is liberated from the mother plant.

Bryophytes: Zygote in bryophytes remains in the archegonium.

Bryophytes: Embryo is formed from the zygote of bryophytes.

Algae: No differentiation of sporophyte into distinct structures is found in algae.

Bryophytes: The sporophyte of bryophytes differentiates into root, seta and capsule.

Algae: Mitospores are present in algae.

Bryophytes: Mitospores are absent in bryophytes.

Algae: Alteration of generation in algae is isomorphic.

Bryophytes: Alteration of generation in bryophytes is heteromorphic.