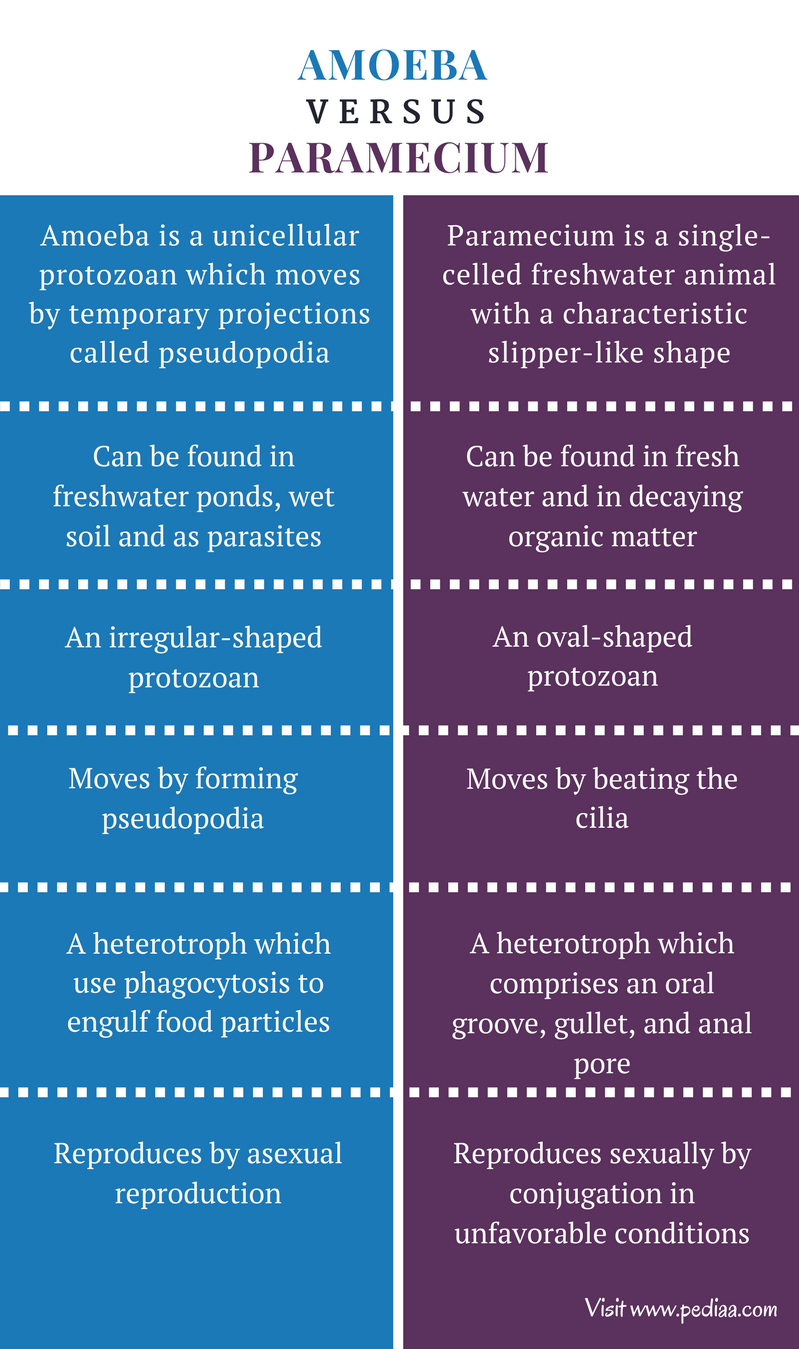 Amoeba is a unicellular eukaryote living in fresh water ponds and wet soil. It also lives as a parasite inside animal bodies. Amoeba is irregular in shape and has a diameter of 0.1 mm. The cell membrane of the amoeba comprises an outer  and an inner endoplasm. Amoeba cell contains a membrane-bound nucleus, food vacuoles and contractile vacuoles in its single-celled body. The propagation of amoeba occurs by forwarding its cytoplasm. The formation of pseudopodium allows amoeba to move slowly. The pseudopodium is also called a false foot. This movement is referred to as amoeboid movement. Typically, amoeba eats bacteria, algae, plant cells, and other microscopic organisms. The process of feeding is referred to as phagocytosis in which pseudopodia is formed to engulf the food particle. The engulfed food is digested inside a vacuole in the body and wastes are eliminated by exocytosis. 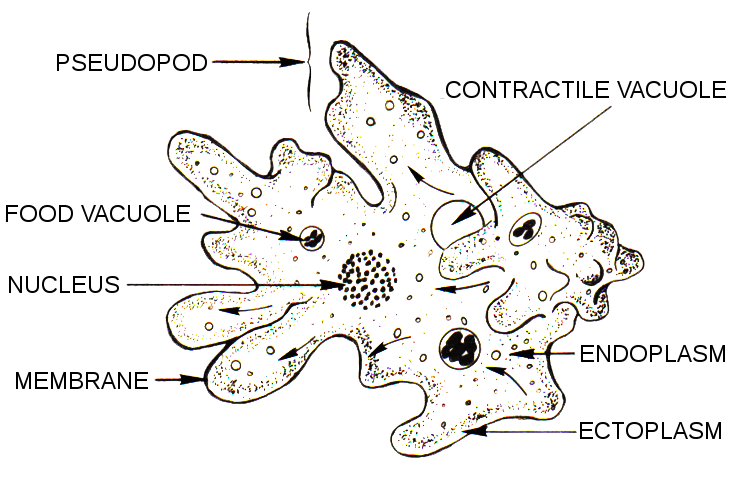 Amoeba reproduces asexually by binary fission and formation of spores. Under favorable conditions, binary fission produces daughter cells by mitotic cell divisions of a parent cell. Spores are formed in dry conditions and during insufficiency of food and those spores are germinated under favorable conditions. Amoeba is sensitive to external stimuli such as the change in light, temperature, and chemicals. It is also sensitive to touch. Amoeba is shown in figure 1.

Paramecium is another unicellular eukaryote, which lives in fresh water and decaying organic matter. It has a slipper-like shape with a length of 0.3 mm. The outer surface of the paramecium is covered by cilia. A paramecium cell contains a large macronucleus and a micronucleus with food vacuole and contractile vacuoles. An oral groove is found on one side of the organism, which forms the gullet, ending with a cytostome. The swim-like locomotion occurs by the beatings of cilia in water. The forward movement is achieved by the backward beats of cilia and the backward movement is achieved by the forward beats of cilia. The cilia are also involved in feeding by moving food into the gullet. The ingested food is digested inside a vacuole and the wastes are eliminated through the anal pore. Paramecium asexually reproduces by binary fission under favorable conditions. Under unfavorable conditions, paramecium reproduces sexually by conjugation. Paramecium is also sensitive to changes in the environment such as temperature, light, chemicals, as well as touch. Paramecium is shown in figure 2. 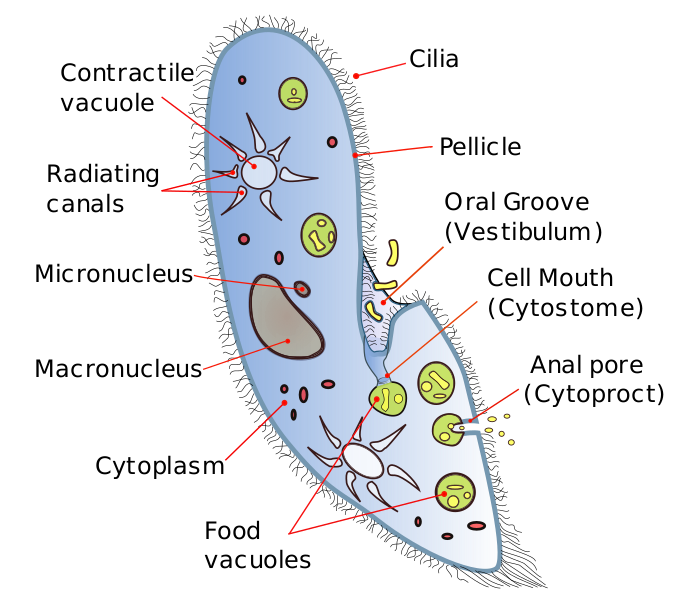 Similarities Between Amoeba and Paramecium

Difference Between Amoeba and Paramecium

Amoeba: Amoeba is a unicellular protozoan which moves by temporary projections called pseudopodia.

Paramecium: Paramecium is a single-celled freshwater animal with a characteristic slipper-like shape.

Amoeba: Amoeba can be found in freshwater ponds, wet soil and as parasites.

Paramecium: Paramecium can be found in fresh water and in decaying organic matter.

Shape of the Organism

Amoeba: Amoeba is an irregular-shaped protozoan.

Paramecium: Paramecium is an oval-shaped protozoan.

Amoeba: Amoeba is a heterotroph which use phagocytosis to engulf food particles.

Amoeba and paramecium are two unicellular eukaryotes. Both of them are protozoans and live in water. Both organisms asexually reproduce by binary fission. The only paramecium exhibits sexual reproduction by conjugation. The main difference between amoeba and paramecium is their locomotion mechanisms; amoeba moves by forming pseudopodia; paramecium moves by beating the cilia.