What Happens During Cytokinesis

During cytokinesis, duplicated genetic material at the opposite poles is separated into two daughter cells along with the half of the cell’s cytoplasm, containing one set of its organelles. The separation of the duplicated genetic material is ensured by the spindle apparatus. The number of chromosomes, as well as the number of chromosome sets of a daughter cell, should be equal to those of the mother cell in order to the daughter cells to be the functional copies of the parent cells. This process is called the symmetrical cytokinesis. On the contrary, during oogenesis, the ovum consists of almost all the organelles and the cytoplasm of the precursor germ cell gonocytes. However, cells of the tissues like liver and skeletal muscle omit the cytokinesis by producing multi-nucleated cells.

Plant cells usually consist of a cell wall. Therefore, they form the cell plate at the middle of the parent cell, in order to separate two daughter cells. Formation of the cell plate is shown in figure 1. 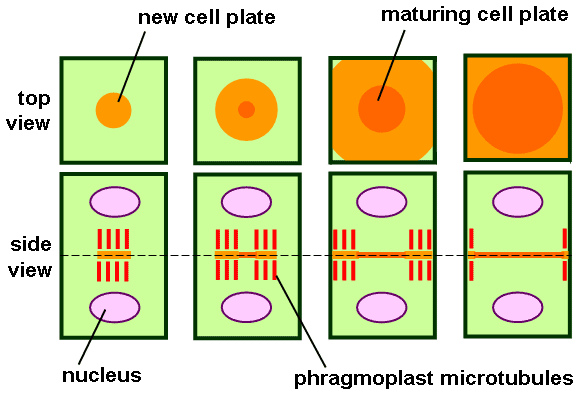 The cell plate formation is a five step process.

Phragmoplast is microtubule array, supporting and guiding the cell plate formation. The microtubules which are utilized for the formation of the phragmoplast are the remnants of the spindle.

Trafficking of Vesicles and Fusion with Microtubules

Vesicles containing proteins, carbohydrates, and lipids are trafficked into the mid zone of the phragmoplast by the microtubules since they are required for the formation of the cell plate. The source of these vesicles is the Golgi apparatus.

Widened microtubules laterally fuse with each other in order to form a planar sheet which is referred to as the cell plate. Other cell wall constituents along with cellulose deposit on the cell plate drive it to further maturation.

Recycling of the cell membrane materials

Unwanted membrane materials are removed from the cell plate by clathrin-mediated endocytosis.

Fusion of the cell plate with the existing cell wall

The edges of the cell plate are fused with the existing parental cell membrane, physically separating the two daughter cells. Most of the time, this fusion occurs in an asymmetric manner. But, strands of the endoplasmic reticulum is found passing through the newly formed cell plate, which behaves as the precursors of the plasmodesmata, a type of cell junctions found in plant cells.

Different cell wall components like hemicellulose, pectins, arabinogalactan proteins, which are carried by the secretary vesicles, are deposited on the newly formed cell plate. The most abundant component of the cell wall is cellulose. First, callose is polymerized by the callose synthase enzyme on the cell plate. As the cell plate fuses with the existing cell membrane, callose is eventually replaced by the cellulose. Middle lamella is generated from the cell wall. It is a glue-like layer, consisting of pectin. The two adjacent cells are bound together by the middle lamella.

The cytoplasm division of the animal cells begins after the separation of the sister chromatids during the anaphase of the nuclear division. Animal cell cytokinesis is shown in figure 2.

The spindle is recognized by the CDK1 activity declines during the anaphase. Then, microtubules are stabilized in order to form the central spindle or the spindle midzone. Non-kinetochore microtubules form bundles in between the two opposite poles of the parent cell. Humans and C. elegans require the formation of central spindle in order to carry out an efficient cytokinesis. The declined activity of CDK1, dephosphorylates the chromosomal passenger complex (CPC), translocating the CPC to the central spindle. The CPC locates at the centromeres during the metaphase.

The cleavage furrow ingresses to form the midbody structure. The diameter of the actin-myosin ring at this position is around 1-2 μm. The midbody is completely cleaved in a process called abscission. During abscission, intercellular bridges are filled with antiparallel microtubules, the cell cortex is constricted and plasma membrane is fashioned.

Molecular signaling pathways ensure the faithful separation of the genome between the two daughter cells. The animal cell cytokinesis is powered by Type II Myosin ATPase in order to generate the contractile forces. The timing of the animal cytokinesis highly regulated.

How is Cytokinesis Different in Plants and Animals 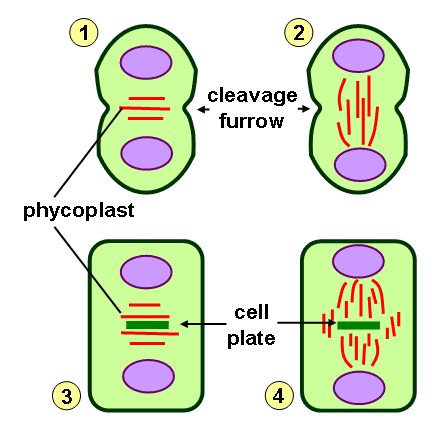 Animal cells do not possess a cell wall. Thus, only the cell membrane is divided into two, forming new cells by deepening a cleavage through a contractile ring in the middle of the parent cell. In plant cells, a cell plate is formed in the middle of the parent cell with the aid of microtubules and vesicles. Vesicles are fused with microtubules, forming a tubular-vesicular network. The deposition of cell wall components leads to the maturation of the cell plate. This cell plate grows towards the cell membrane. Therefore, an animal cell’s cytoplasmic division begins in the edges of the cell (centripetal) and plant cell’s cytoplasmic division begins at the middle of the cell (centrifugal). Thus, midbody formation can be identified only in the animal cell cytokinesis. The cytokinesis of plant cells begins at the telophase of the nuclear division and animal cell cytokinesis begins at the anaphase of the nuclear division. Animal cell cytokinesis is tightly regulated by signal transduction pathways. It also requires ATP for the contraction of actin and myosin proteins.