Evolution and mutation are two processes that bring changes to the genetic makeup of a particular organism. These alterations in the genome are heritable. 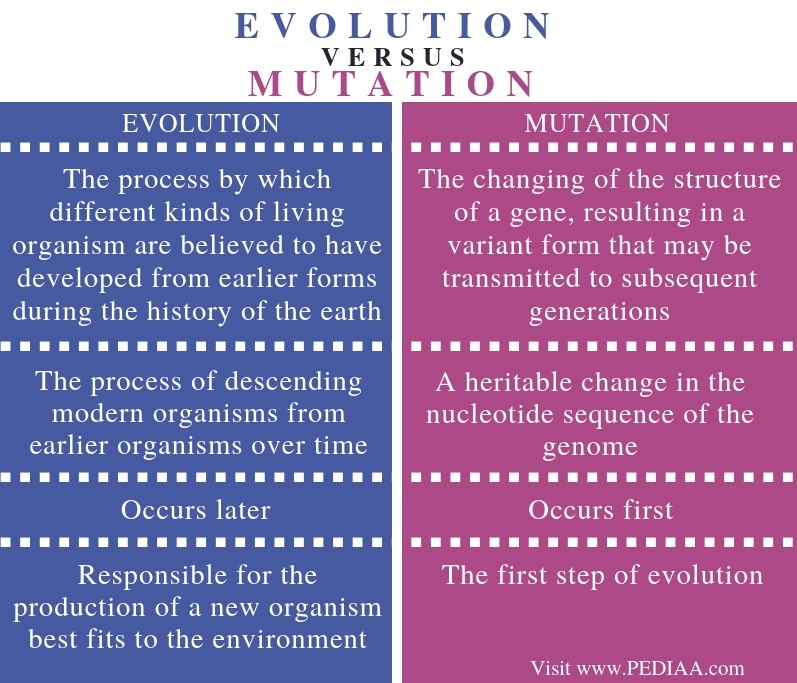 Evolution is the change in the heritable characteristics of biological populations over successive generations. The major driving forces of evolution are mutations, natural selection, gene flow, and genetic drift. Additionally, some sexual selection methods such as hybridization and inbreeding also lead to evolution. Moreover, evolution is responsible for continuous branching and diversification of organisms starting from a common ancestor in a process called speciation. The grand idea about evolution was first fully expounded by Charles Darwin. 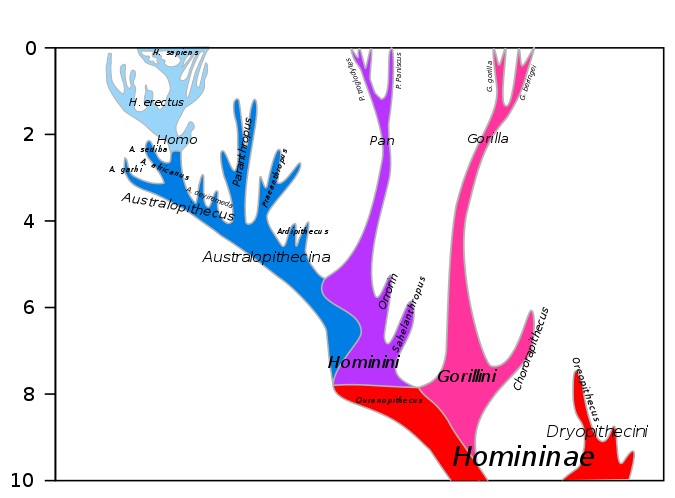 Figure 1: Evolution of the Hominini Lineage

Furthermore, evolution takes place in both small scale (microevolution) and grand scale (macroevolution). Mutations, gene flow, genetic drift, and natural selection are the major driving forces of microevolution while the four patterns of macroevolution are stasis, character change, speciation, and extinction. Here, some species do not change over a period of time and exist as live fossils, which is known as stasis. Meanwhile, character change is the emergence of analogous or homologous structures. In speciation, either geographical or reproductive isolation of individuals in a population lead to the emergence of new species. Additionally, most species become extinct during evolution.

Moreover, mutations range from size as well. Therefore, they can be classified based on their effect on the genome. Some mutations known as small-scale mutations change several nucleotides in the genome. Point mutations are the alterations of single nucleotides in the genome. Although they resemble SNPs, their occurrence is rare (less than 1%) within a population. Additionally, insertions, deletions, and substitution mutations can alter more than one nucleotide of the genome. In contrast, large-scale mutation alters the structure of the chromosomes. Moreover, chromosomal rearrangements such as translocations, inversions, chromosomal crossover, etc. change the structure of chromosomes.

Similarities Between Evolution and Mutation

Difference Between Evolution and Mutation

Evolution refers to the process by which different kinds of living organism are believed to have developed from earlier forms during the history of the earth while a mutation refers to the changing of the structure of a gene, resulting in a variant form that may be transmitted to subsequent generations, caused by the alteration of single base units in DNA, or the deletion, insertion, or rearrangement of larger sections of genes or chromosomes.

Such that; the main difference between evolution and mutation is that the evolution is the process of descending modern organisms from earlier organisms over time while a mutation is a heritable change in the nucleotide sequence of the genome.

Moreover, evolution is responsible for the production of a new organism that best fits the environment while a mutation is the first step of evolution. Hence, this is also a difference between evolution and mutation.

Evolution is the process of producing modern organisms from earlier organisms over time. The main importance of evolution is that it helps to produce an organism that best fits the environment. On the other hand, a mutation is a heritable change in the nucleotide sequence of the genome. It allows the production of new phenotypes driving the organism to evolution. Therefore, the main difference between evolution and mutation is their effect.