Ethylene is the simplest alkene having the chemical formula H2C=CH2. It has two carbon atoms bonded to each other via a double bond. It is a colorless, flammable gas. The IUPAC name of ethylene is ethane. The molar mass of this compound is 28.05 g/mol. Its melting point is −169.2 °C and boiling point is −103.7 °C. 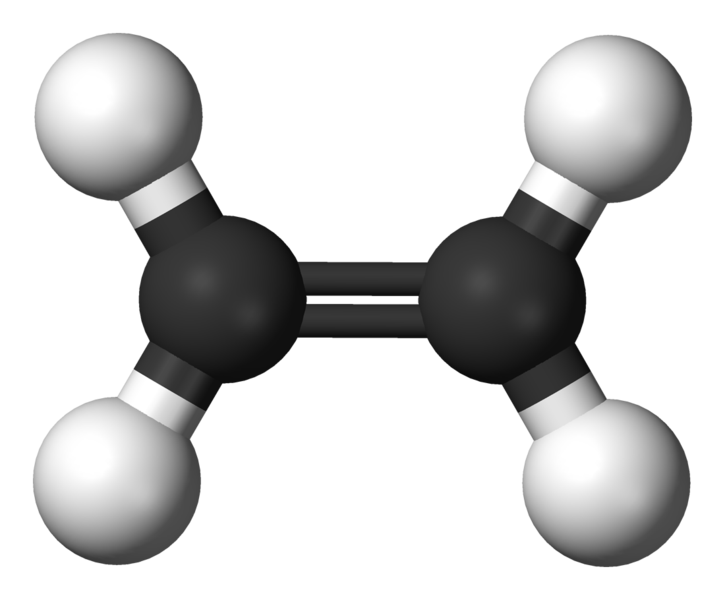 Ethylene has a sweet taste and odor. Natural sources of ethylene are crude oil and natural gas. Ethylene is used to make important compounds such as polymers; the polymers obtained by ethylene polymerization include poly(ethylene), poly(chloroethene) and poly(phenylethene). The other chemicals produced from ethylene include ethanol and epoxyethane.

Ethylene has two carbon atoms which are sp2 hybridized. The carbon atoms are bonded via a sigma bond and a pi bond. Each carbon atom is bonded to 2 hydrogen atoms. It is a planar molecule. The geometry around one carbon atom is trigonal planar. The pi bond is responsible for the reactivity of the ethylene molecule.

The molar mass of acetylene is 26.04 g/mol. Its IUPAC name is ethyne. It is a colorless flammable gas. Hence it is widely used as a gas. However, it is odorless (unlike ethylene). The melting point of acetylene is −80.8 °C, and the boiling point is −84 °C.

The chemical reaction process is the production of acetylene from calcium carbide as mentioned above. The thermal cracking process is a method that includes cracking or breaking of bonds and rebinding to get a new compound.

Similarities Between Ethylene and Acetylene

Difference Between Ethylene and Acetylene

Ethylene: Ethylene is the simplest alkene having the chemical formula H2C=CH2.

Acetylene: Acetylene is the simplest alkyne having the chemical formula C2H2.

Ethylene: Ethylene is an alkene.

Acetylene: Acetylene is an alkyne.

Ethylene: There is a double bond between two carbon atoms in ethylene.

Acetylene: There is a triple bond between two carbon atoms in acetylene.

Acetylene: The molar mass of acetylene is 26.04 g/mol.

Ethylene: Ethylene has a sweet odor.

Ethylene: The geometry around one carbon atom is linear in acetylene.

Acetylene: The geometry around one carbon atom is trigonal planar in ethylene.