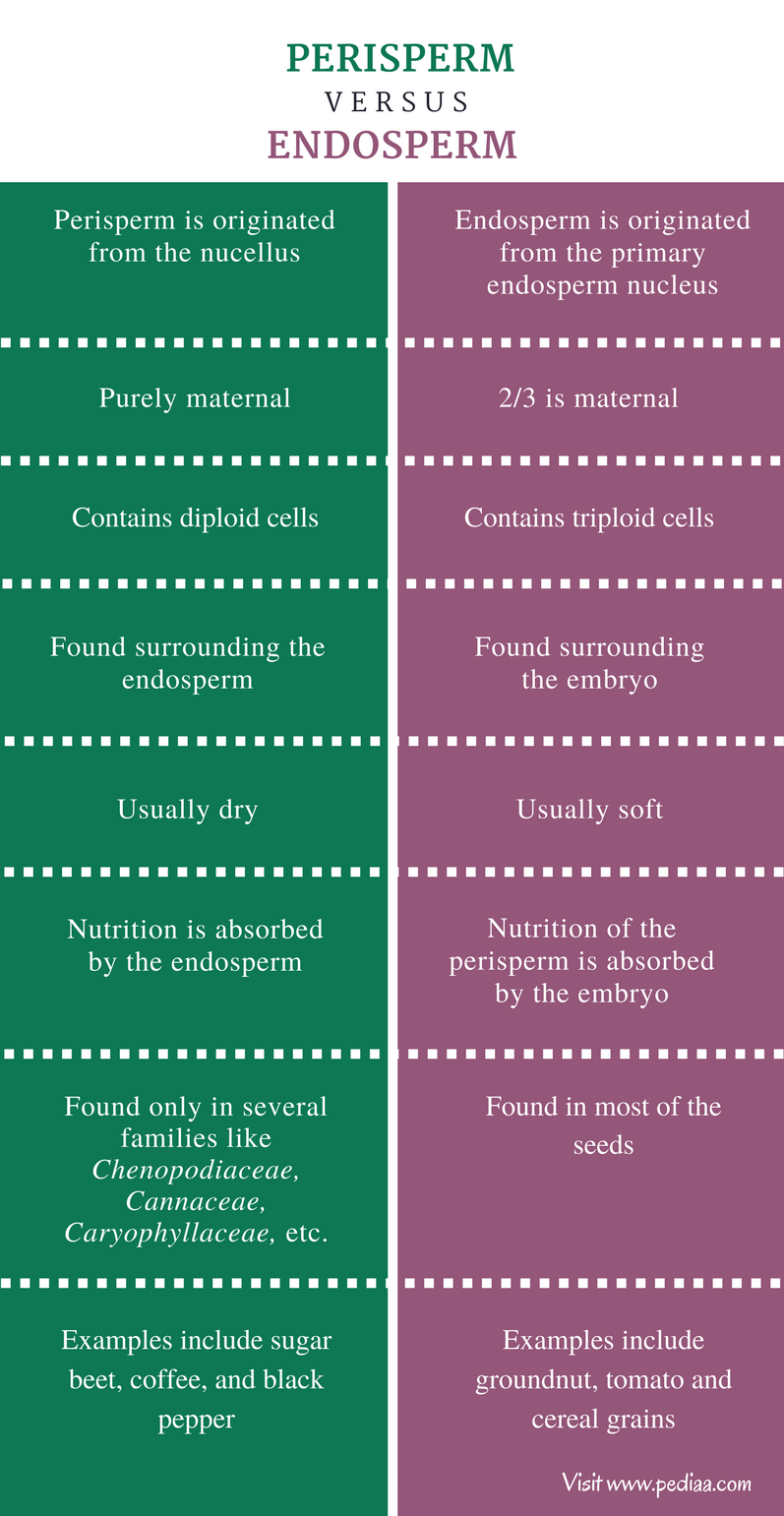 Perisperm is one of the food storing tissues of the seed. It originates from the nucellus, which is the central part of the ovule in the embryo sac. The endosperm consumes the nucellus during its development. Perisperm is found only in several families like Chenopodiaceae, Cannaceae, Caryopyllaceae, Amaranathaceae, Capparidaceae, Portulacaceae, Piperaceae and Zingiberaceae. In these families, persisting embryo sac becomes densely-packed food material inside the seed. Endosperm is found between the perisperm and embryo. Hence, endosperm in the seed absorbs nutrients from perisperm, transforming it into the embryo.

In Piperaceae, some nucellar cells rapidly increase their number following the fertilization, compared to the other nucellar cells. These cells fuse with each other, forming composite cells. These composite cells contain a dense cytoplasm, which stores oil globules. The epidermal nucellar cells store starch. A gradient of stored starch is found from the chalazal end to the base of the embryo sac. The 95% of the seed of Piperaceae is perisperm. Thus, its endosperm is found highly reduced. The ovule of angiosperm containing the nucellus is shown in figure 1. Figure 1: Nucellus in the angiosperm ovule

The endosperm is the most prominent food storing tissue of the seed. It is formed from the primary endosperm nucleus. The fusion of one of the two sperm cells coming through the pollen tube in the process called triple fusion produces the primary endosperm nucleus inside the embryo sac. During triple fusion, three haploid nuclei are fused together, forming the triploid nucleus. The repeated cell division by mitosis forms the endosperm, which is capable of storing food for the development of the embryo. Typically, the endosperm is considered as polyploid, which can be varied from 2n to 15n.

Starch is mostly found in the endosperm. Oils and proteins are found in the endosperm as well. Endospermic seeds and non-endospermic seeds are the two types of seeds, which are classified depending on the presence or absence of endosperm inside the seed. Dicots are considered as non-endospermic seeds since nutrients in their endosperm are absorbed by the two cotyledons during the development of the embryo before seedling. Hence, a very small endosperm is found in seeds of dicots. Therefore, the seed of the dicot is also called exalbuminous. Monocots are the endospermic seeds, containing a prominent endosperm inside the seed. Therefore, the seeds of monocots are also called albuminous seeds. Monocots contain the largest seeds compared to dicots. Cereal crops are monocots. Endosperm of the cereal crops like wheat and barley can be utilized as a source of food in the human diet as well. The internal structure of the dicot seed is shown in figure 2. 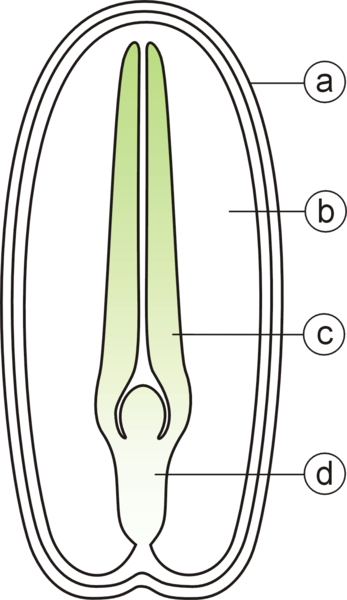 Difference Between Perisperm and Endosperm

Endosperm: The 2/3 of the endosperm is maternal.

Perisperm: The nutrition of the perisperm is absorbed by the endosperm.

Endosperm: The nutrition in the endosperm is absorbed by the embryo.

Endosperm: Endosperm is found in most of the seeds.

Perisperm: Sugar beet, coffee, and black pepper are the examples of perispermic seeds.

Perisperm and endosperm are the two types of nutritive tissues found in seeds. Perisperm bears a maternal origin since it is originated from the nucellus of the embryo sac. Hence it is diploid. Perisperm is only found in several families of plants. It is found surrounding the endosperm. Endosperm is found surrounding the embryo in most of the seeds. It is prominent in monocot seeds. The nutrients in the endosperm of dicot seeds are absorbed by the cotyledons of the embryo before seedling. Endosperm originates from the repeated mitotic cell division of the cell, containing the primary endosperm nucleus. The primary endosperm nucleus is formed by the fusion of two polar nuclei with one of the two sperm cells in the event called triple fusion. Hence, the endosperm is triploid in most of the times. However, the main difference between perisperm and endosperm is in the formation of each tissue during the development of the seed.