What is Binary Fission?

The division of a single organism into two daughter organisms is known as binary fission. Bacteria and archaea like prokaryotes generally exhibit binary fission as the cell division mechanism in their asexual reproduction. Some eukaryotic organelles like mitochondria also exhibit binary fission in order to increase their number inside the cell. Prokaryotes contain a single, circular chromosome in the genome. This DNA molecule is replicated prior to the cell division. While the parent cell pulls apart, replicated chromosomes are separated. Resultant two cells are genetically identical and have a potential to grow its original size in the species.

DNA replication is the first event in the process of binary fission. The single circular chromosome in the vegetative cell is tightly coiled. It becomes uncoiled and then is replicated. Replicated two chromosomes move to the opposite poles by an energy-dependent process. Then the cell increases its length. All the components like ribosomes and plasmids of the prokaryotic cell double their number. The equatorial plate constricts in order to separate the plasma membrane. A new cell wall forms between the separated cells. The division of the cytoplasm is known as cytokinesis. The two newly formed cells contain approximately equal number of ribosomes, plasmids and other components. The volume of the cytoplasm is also approximately equal.

Four types of binary fission can be identified.

Irregular binary fission – cytokinesis takes place in the perpendicular plane to the plane which karyokinesis has taken place. It occurs in amoeba.

Longitudinal binary fission – cytokinesis occurs along the longitudinal axis. This occurs in flagellates and Euglena.

Transverse binary fission – cytokinesis occurs along the transverse axis. It occurs in paramecium like protozoans. 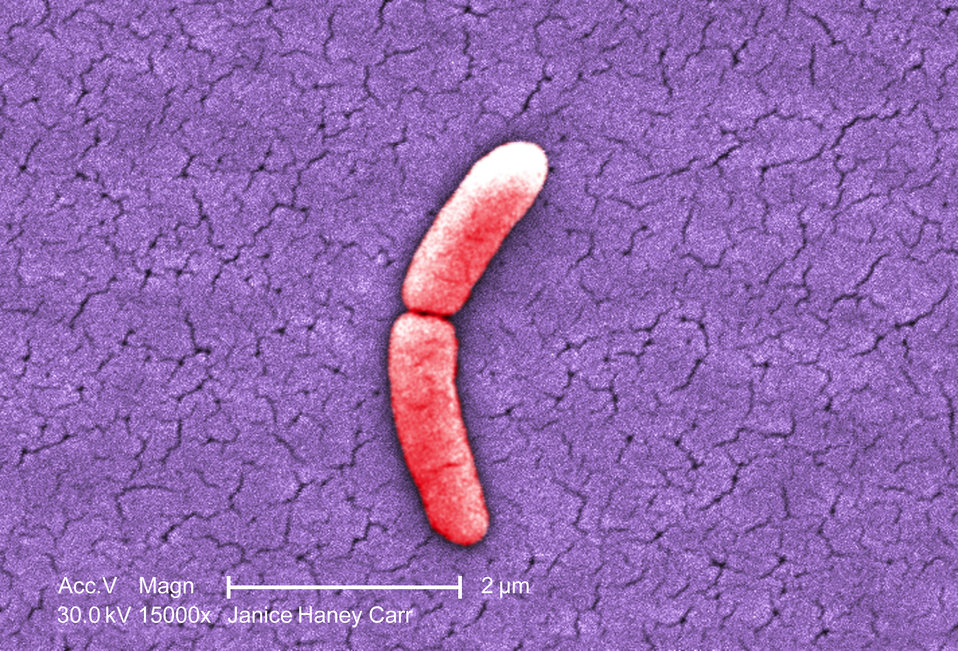 Binary fission is considered as a rapid process. Typically, an E. coli cell at 37 °C divides every 20 minutes. The whole bacterial culture undergoes binary fission; hence the time taken by one cycle is referred to as the doubling time. Some strains like Mycobacterium tuberculosis have slow doubling time compared to E. coli.

The vegetative cell division in eukaryotes is known as mitosis. Replicated genome is divided, forming two daughter nuclei followed by the cytoplasmic division which may ultimately produce two cells from a single parent cell. The two cells are identical, bearing approximately equal number of organelles and cytoplasm. The mitotic phase is called the M phase of the cell cycle. Various types of mitosis can be identified among organisms. During the “open” mitosis in animals, nuclear envelope is broken down in order to separate the chromosomes. But in fungi, chromosomes separate in the intact nucleus; this is called as “closed” mitosis.

Eukaryotes use mitosis in their asexual reproduction, growth and development, replacement of body cells and regeneration of body parts.

During pre-prophase, the nucleus of the highly vacuolated plants migrates to the center of the cell. Prophase is the first stage of the nuclear division in mitosis. At early prophase, the nucleolus disappears. The chromosomes are tightly coiled and the formation of the mitotic spindle is initiated at the prophase. Chromosomes, containing two sister chromatids which are joined together at the centromere can be visualized as thin, long, thread-like structures under the light microscope. A pair of centrosomes appears close to the nucleus which is surrounded by protein fibers, forming the microtubule spindle apparatus. Plants do not possess a centrosome, which is the coordinating center of microtubules. Thus, the formation of spindle apparatus is not essential for the cell division in plants.

The contracted microtubules are loosened, lengthening the cell. A new nuclear envelope is formed, enclosing two chromosome sets at the opposite poles, reappearing two nuclei.

The karyokinesis occurs in the M phase, followed by cytokinesis, the division of the cytoplasm, a process which is separated from the M phase. Plant cytokinesis is different from animal cytokinesis due to the presence of a cell wall. In animal cells, a cleavage furrow is formed in order to pinch off the cytoplasm with the aid of contractile ring, developed at metaphase of karyokinesis. In plants, a cell plate is formed in the middle of the parent cell which matures to fuse with the existing cell wall. Both animal and plant cell cytokinesis are driven by the vesicles coming from the Golgi apparatus. In most organisms, karyokinesis and cytokinesis take place separately.

Difference Between Binary Fission and Mitosis

Binary Fission: Binary fission is the division of a single organism into two daughter organisms.

Mitosis: Mitosis is the vegetative cell division in eukaryotes.

Binary Fission: Binary fission does not take place in organisms who have a nucleus.

Mitosis: Mitosis takes place in organisms who possess a nucleus.

Formation of the Spindle Apparatus

Binary Fission: A spindle apparatus is not formed during binary fission.

Binary Fission: Prokaryotes do not have organelles. However, ribosomes and other cellular components are doubled before binary fission.

Mitosis: Organelles are doubled at the interphase in order to separate into two cells.

Binary Fission: Asexual reproduction in prokaryotes is the function of the binary fission.

Binary Fission: DNA is directly attached to the cell membrane during the binary fission.

Mitosis: DNA is attached to the spindle apparatus during the mitotic division.

Binary Fission: Binary fission is a less reliable process, resulting in increased number of chromosomes in a cell.

Mitosis: Mitosis is corrected through metaphase checkpoint in order to maintain a uniform chromosome number.

Mitosis: Mitosis is comparatively complex than the binary fission.

Mitosis: Mitosis takes some time due to its complexity.

Mitosis: Mitosis takes place in all animals including humans, all plants, and fungi.

Binary fission and mitosis are two types of asexual reproduction mechanisms found in prokaryotes and eukaryotes, respectively. Mitosis takes place through several phases, dividing the nucleus of eukaryotic cells. It has a higher reliability since corrections occur during metaphase checkpoint in order to maintain a fixed chromosome number in the progeny. Hence, it is a time taking and more complex process compared to binary fission. Therefore, the main difference between binary fission and mitosis is their complexity.