Bacteria are unicellular prokaryotic microorganisms with a cell wall made up of peptidoglycans. However, they do not have organelles or an organized nucleus. They contain a rigid cell wall, which is made up of peptidoglycans. Inside the cell wall, the cell membrane is present. The cytoplasm of bacteria contains 70 S ribosomes, a nucleoid with DNA, and plasmids. The genetic material of bacteria is organized into a single, double-stranded chromosome. Some bacteria contain flagella for movement. The three main basic shapes of bacteria are coccus, bacillus, and spirillum. The structure of a bacterial cell is shown in figure 1. 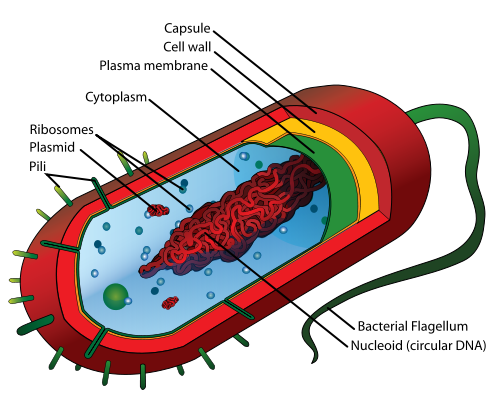 Fungi refers to unicellular or multicellular microorganisms, decomposing and absorbing organic material on which they grow. The cell wall of fungi is made up of chitin. Most fungi are multicellular, making the fungal hyphae. A mass of hyphae is called the mycelium. Yeast is a unicellular fungi. The genetic material of fungi is organized into the nucleus. Fungi contain membrane-bound organelles such as mitochondria, endoplasmic reticulum, and Golgi apparatus. The lysosomes of fungi contain digestive enzymes which are secreted on the organic material by the fungus. Therefore, the digestion of food occurs outside of the body of fungi. The nutrients are absorbed by the fungi through their cell wall. The structure of a fungus is shown in figure 2. 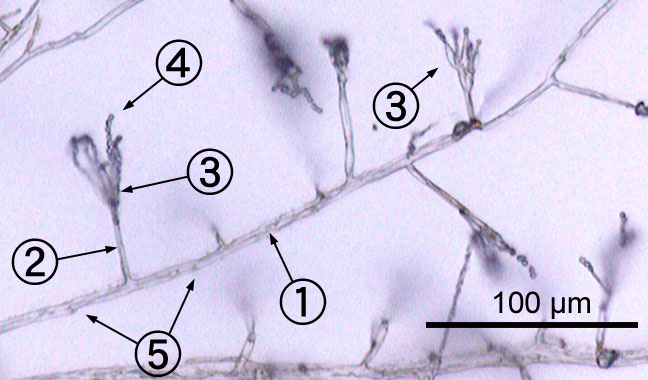 Reproduction of fungi occurs by budding, fragmentation, and production of sexual or asexual spores. Fungi may also cause diseases in animals as well as plants. Antifungal agents can be used to treat fungal diseases.

Similarities Between Bacteria and Fungi

Difference Between Bacteria and Fungi

Bacteria: Bacteria refers to unicellular prokaryotic microorganisms with a cell wall made up of peptidoglycans but, lacking organelles and an organized nucleus.

Fungi: Fungi refers to unicellular or multicellular microorganisms, decomposing and absorbing organic material on which they grow.

Fungi: Most of the fungi are multicellular organisms.

Bacteria: The favorable pH for the bacterial growth is 6.5-7.0.

Fungi: The favorable pH for the fungal growth is 4-6.

Bacteria: Spirella, coccus, and bacillus are the common morphologies of bacteria.

Fungi: Hypha and yeast are the common morphologies of fungi.

Bacteria: Bacterial cell wall is made up of peptidoglycans.

Fungi: Fungal cell wall is made up of chitin.

Bacteria: Bacterial genetic material is localized in the nucleoid of the cytoplasm.

Fungi: Fungal genetic material is localized in the nucleus.

Bacteria: Bacteria do not contain membrane-bound organelles inside the cell.

Bacteria: Binary fission is the asexual reproduction method of bacteria.

Fungi: Fungi reproduce through both sexual and asexual spores.

Fungi: Candidiasis, ringworm, and different infections can be caused by fungi.

Bacteria: Bacteria are used in the production of antibiotics and other useful chemicals.

Fungi: Fungi are used in the production of beer, bread, and antibiotics.