DNA (deoxyribonucleic acid) is a type of nucleic acid that serves as the hereditary material of most organisms. DNA is mainly found in the nucleus of eukaryotes. A small amount of DNA is also found inside organelles such as mitochondria and chloroplast. The four nitrogenous bases, adenine (A), Guanine (G), cytosine (C), and thymine (T) are involved in storing the genetic information on the DNA. Each nitrogenous base is attached to a deoxyribose sugar group, which itself is attached to a phosphate group. This forms the basic building blocks of DNA, which are called nucleotides.

The total DNA of an organism is called the genome of that organism. Humans contain 3 billion nucleotides in the genome. These nucleotides are arranged in two strands that are complementary to each other. The adenine bases of one strand form hydrogen bonds with the thymine bases of the other strand. Likewise, the cytosine bases form hydrogen bonds with the guanine bases. This process is called complementary base pairing, and this forms a double-stranded structure of DNA. The DNA double strand forms a double-helix structure. The DNA double helices are arranged in chromosomes and are tightly packed inside the nucleus. DNA molecules are capable of self-replicating to make new copies of DNA from the existing copies. The structure of the DNA double-helix is shown in figure 1.

The cDNA (complementary DNA) refers to the single-stranded DNA produced from the reverse transcription of messenger RNA templates. Reverse transcription is catalyzed by the enzyme, reverse transcriptase. cDNA is also produced in retroviruses during the conversion of the RNA genome into DNA. cDNA is mainly used in cloning eukaryotic genes in prokaryotes. Eukaryotic genes contain introns in between the exons, which codes for proteins. During transcription, both introns and exons are coded into messenger RNA (mRNA). But, the introns are removed from mRNA to produce a mature mRNA by splicing the exons together. The total mRNA of an organism is called the transcriptome. This mRNA can be used to produce cDNA, containing only the protein coding regions of the genome. 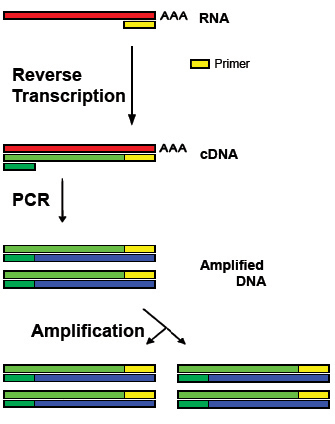 The synthesis of cDNA from DNA reduces the number of base pairs that should be handled during an experiment. This cDNA is then cloned into vectors, which can carry foreign DNA into other prokaryotic or eukaryotic organisms. Bacteria, as well as the unicellular fungi, are transformed with eukaryotic genes. Reverse transcription coupled with a PCR is shown in figure 2.

Similarities Between DNA and cDNA

Difference Between DNA and cDNA

DNA: DNA refers to a type of nucleic acid, consisting of a double-helix, which is held by the hydrogen bonds between the purines and pyrimidines in the two chains.

cDNA: cDNA refers to the DNA that is synthesized using messenger RNA as the template.

DNA: DNA is synthesized from the existing genomes.

cDNA: cDNA is synthesized from the cytosolic mRNA.

DNA: DNA is synthesized during DNA replication by the action of the enzyme DNA polymerase.

DNA: DNA is double-stranded in nature.

DNA: DNA consists of both coding and non-coding sequences of an organism.

cDNA: cDNA only consists of the coding regions or the exons.

DNA: The total DNA of an organism is called the genome.

cDNA: The total cDNA of an organism is called the transcriptome.

DNA: DNA contains a large number of base pairs.

cDNA: cDNA contains a few base pair compared to DNA.

DNA: DNA can be used to produce genomic libraries.

cDNA: cDNA can be used to produce cDNA libraries.

DNA and cDNA are two forms of nucleic acids widely used in molecular biological techniques. Both DNA and RNA are made up of DNA nucleotides. DNA is the most common nucleic acid found in genomes. It is composed of a double-helix structure. The new DNA is synthesized from the existing DNA during DNA replication by the enzyme, DNA polymerase. cDNA is made up of a single-stranded DNA molecule. It is synthesized from mRNA molecules in a process called reverse transcription by the enzyme reverse transcriptase. DNA contains both coding and the non-coding regions of the genome. But, cDNA only contains coding regions or the exons. The main difference between DNA and cDNA is the composition of each type of nucleic acid.