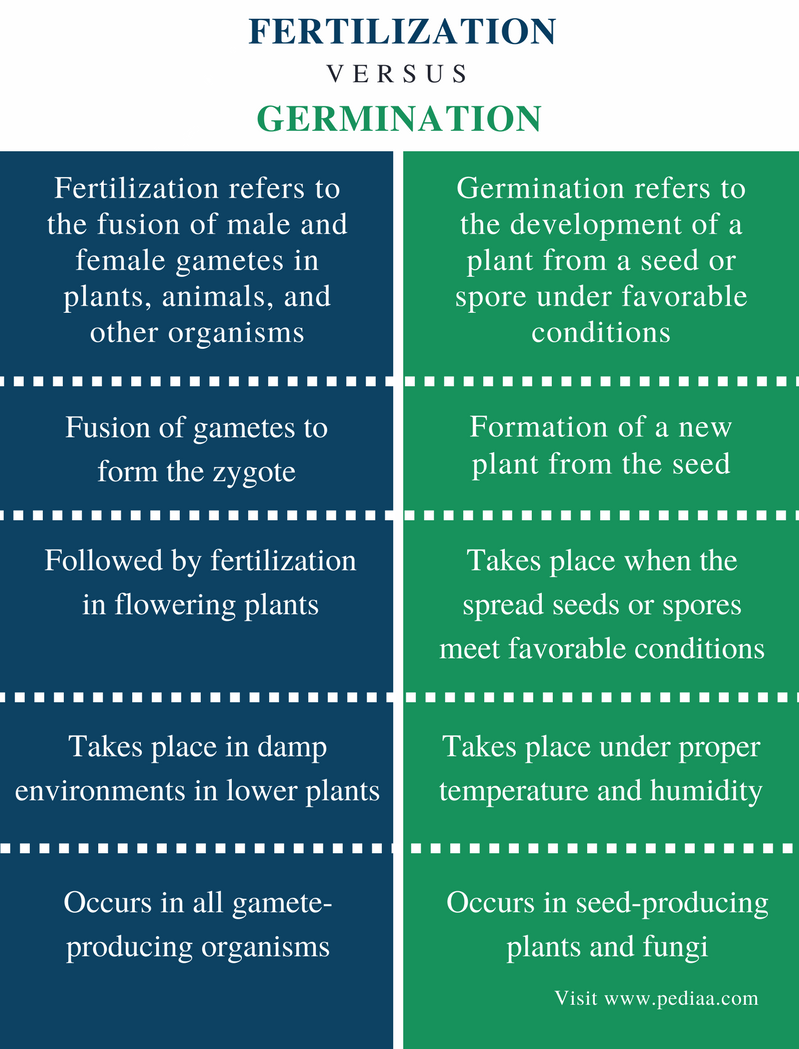 Fertilization is the fusion of male and female gametes in plants, animals, and other organisms. The fusion of gametes is also called syngamy.

In flowering plants, fertilization follows pollination. During pollination, pollen grains land on the stigma of a flower in the same species. A pollen consists of a tube cell and a generative cell. Tube cell produces the pollen tube. Generative cell develops two sperm cells. The pollen tube grows down the style until it finds the ovary. Once the pollen tube penetrates the ovule using a tiny hole in the ovule called micropyle, it bursts, releasing the two sperm cells into the embryo sac.

Double fertilization occurs in flowering plants (angiosperms); one sperm fertilizes the egg cell situated at the bottom of the female gametophyte, forming the diploid zygote. Female gametophyte is also called the embryo sac. The other sperm cell is fused with the central cell. The central cell contains two haploid polar nuclei. Hence, the resulting cells are triploid, which are divided by mitosis, forming the endosperm. Endosperm is a nutrient-rich tissue, found inside the seed. Different stages of double fertilization in flowering plants are shown in figure 1. 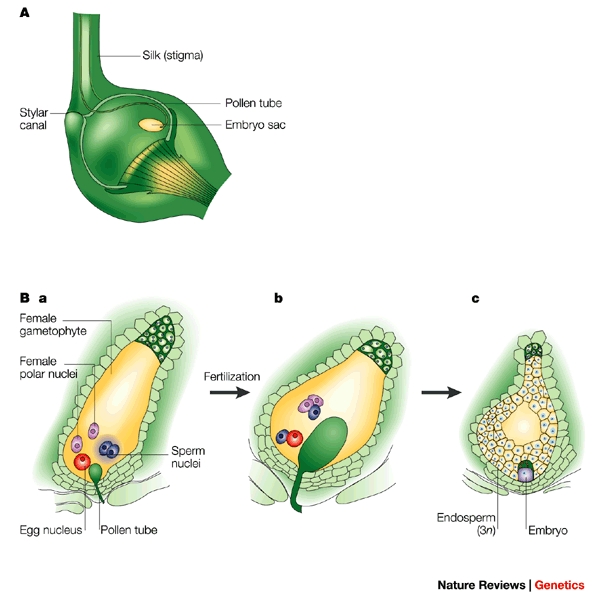 The ovary of an angiosperm is developed into a fruit after the fertilization. Some plants like avocados contain a single ovule in the ovary per a flower. These plants develop a single seed per fruit. Some plants like kiwi fruit contain several ovules in the ovary of a flower. They produce multiple seeds per fruit. In fruits with multi-seeds, multiple pollen grains are involved in the fertilization of several ovules.

Germination refers to the development of a plant from a seed or spore under favorable conditions. The plants that produce seeds are called seed plants. Spores are produced by both lower plants as well as fungi.

Some seeds are dormant and the others non-dormant. Non-dormant seeds start germination with proper humidity and temperature. Imbibition is the uptake of water by the seed. Upon imbibition, seeds expand, and enzymes become activated, and food inside the seed become hydrated. The activated enzymes start the metabolic processes, enabling the growth of the embryo. The radical or the root first emerge from the seed coat. Eventually, the shoot emerges from the seed.

Bacteria, fungi, algae, and lower plants such as bryophytes and ferns produce spores. As most of the spores are dormant, they have to undergo maturation prior to germination. Upon germination, the dormant spores decrease heat resistance and refractility, release of dipicolinic acid, and increase in permeability.

Imbibition is the first step of germination of spores as well. The breakdown of the wall of the spore allows the release of the thallus. During the outgrowth of the thallus, DNA replication, gene transcription, and protein synthesis take place in an orderly manner. The functional genes in DNA replication, transcription, protein synthesis, transport, and regulation are activated. Then, cell division, cell membrane and cell wall expansion take place, aiding the further growth of the thallus.

Similarities Between Fertilization and Germination

Difference Between Fertilization and Germination

Fertilization: Fertilization refers to the fusion of male and female gametes in plants, animals, and other organisms.

Germination: Germination refers to the development of a plant from a seed or spore under favorable conditions.

Germination: Germination is the formation of a new plant from the seed.

Fertilization: Pollination is followed by fertilization in flowering plants.